Highlights of the National Shelter Study 2005–2014

Highlights of the National Shelter Study 2005–2014

The National Shelter Study 2005–2014: Emergency Shelter Use in Canada, to be published in fall 2016, is the second national analysis using emergency shelter data collected over an extended period of time to establish a baseline count and description of the characteristics of the homeless population using shelters in Canada. The first national shelter study covered the period from 2005 to 2009. The current update of the original study extends the findings to 2014. Starting in 2014, statistics on the Indigenous identity, citizenship and military service of shelter users are available for the first time.

This document provides the key findings of the updated study. It begins by looking at trends in the average shelter occupancy rate, the number of times shelter beds were used, the overall number of Canadians using shelters annually and the length of stay by individuals using Canada’s emergency shelter system. It then examines the demographic characteristics of shelter users and changes in the shelter-using population over the past decade. The study uses emergency shelter data collected electronically by the Homeless Individuals and Families Information System (HIFIS), the City of Toronto, BC Housing and the Province of Alberta. Emergency shelter use is the best available indicator of large-scale trends in homelessness, and the results of this study are important for understanding homelessness in Canada.

The National Shelter Study is based on anonymous information from 1.9 million shelter stays that occurred at over 200 of the 400 emergency shelters across Canada during a 10-year period.

The study uses a stratified cluster sample of emergency shelters to ensure accurate estimates of the number and characteristics of shelter users. In 2014, the sample included most of the largest shelters in Canada, covering 71.5% of the total emergency shelter beds in the country. The sample is based on emergency homeless shelters and does not include Violence Against Women shelters and transitional housing. The study’s methodology also takes into account people who use more than one shelter.

Canada’s emergency shelter system is operating at over 90% capacity 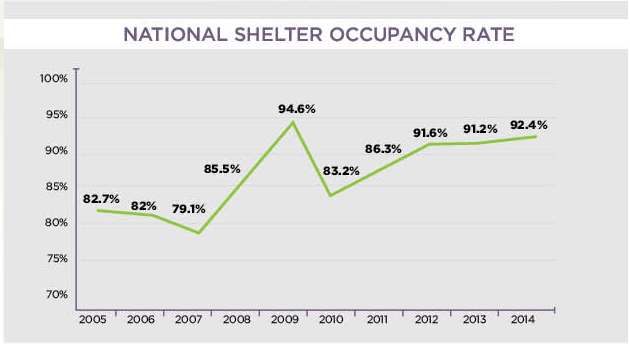 More bednights are being used annually by fewer people

Although the annual number of shelter users has fallen from 156,000 in 2005 to 136,000 in 2014, emergency shelters served an average of 800 more people per night in 2014 compared to 2005. Bednights measure the number of times a shelter bed is used in a year. In 2014, over 5 million bednights were used at emergency shelters in Canada, an increase of 300,000 since 2005. This indicates that, although there are fewer people using shelters, they are using shelters more. 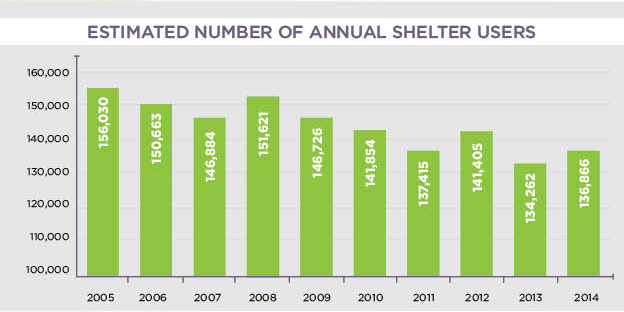 Duration of shelter stays has increased, especially among families and people 50 and over

Demand for shelter beds has increased due to longer stays, especially by families and people aged 50 and over. A typical shelter stay by a family was over 20 days in 2014, twice as long as a stay by individuals. People over 50 typically spend eight or nine more days in shelter than people under 50. However, stay lengths have increased for all types of shelter users since 2005. 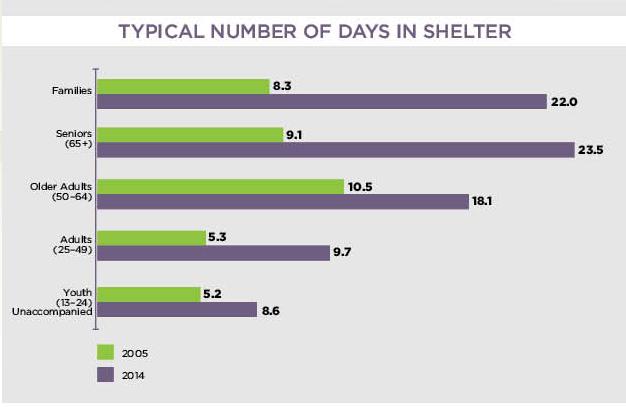 Most Canadians using emergency homeless shelters do not have repeat stays

While the duration of shelter stays has increased over the period from 2005 to 2014, only a minority of shelter users repeatedly use shelters year after year. Over the five-year period from 2010 to 2014, an estimated 450,000 people used an emergency shelter. Fewer than 2% of this total used a shelter in each year of the five-year period. During any one-year period, up to 70% of the people who use shelters are first-time shelter users, and most use a shelter only once.

Figure 5: Most shelter use is short term 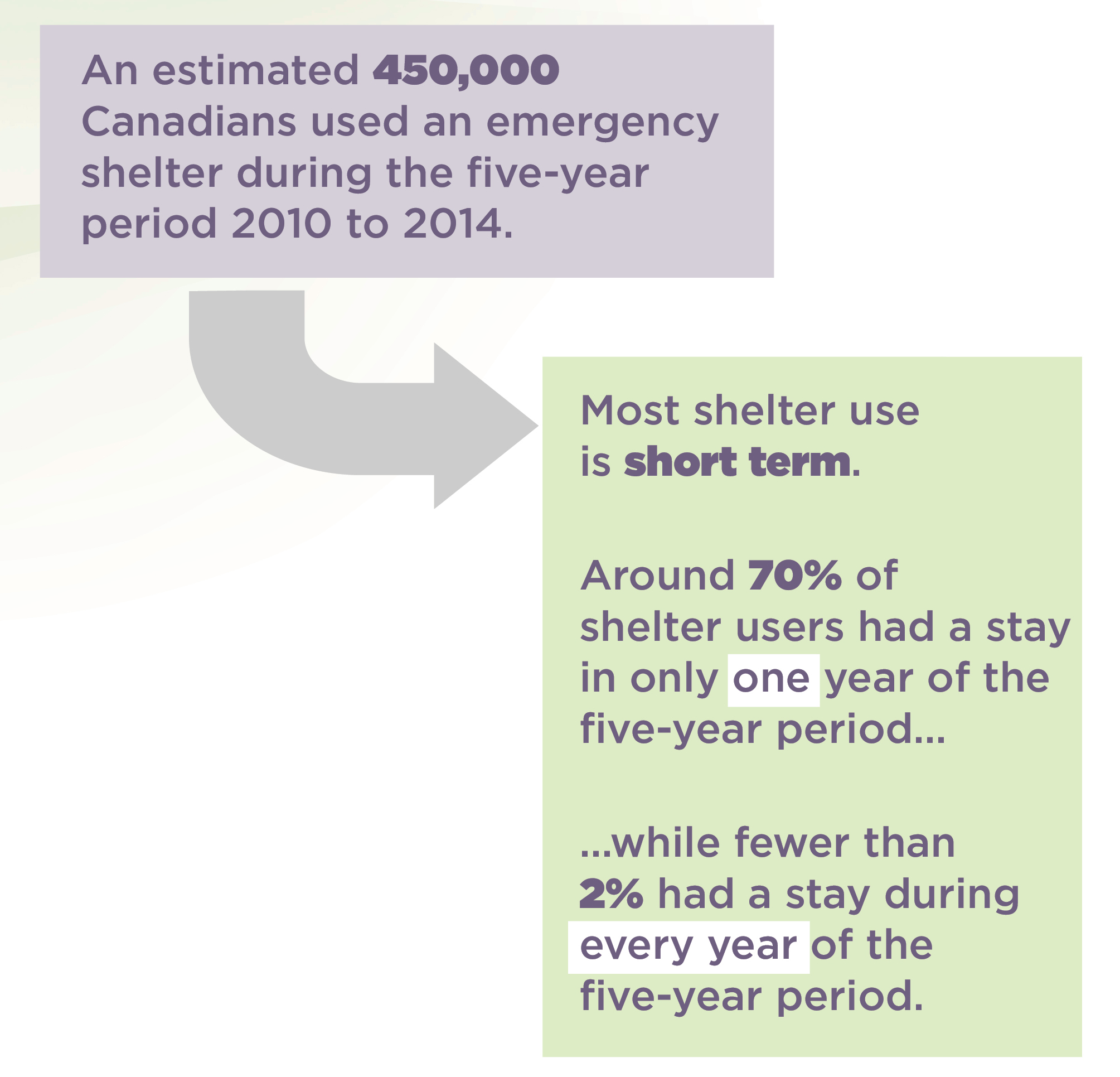 Although the total number of individuals using shelters annually is down by almost 20,000 since 2005, a closer look at the statistics reveals that shelter use changed over time by age group. 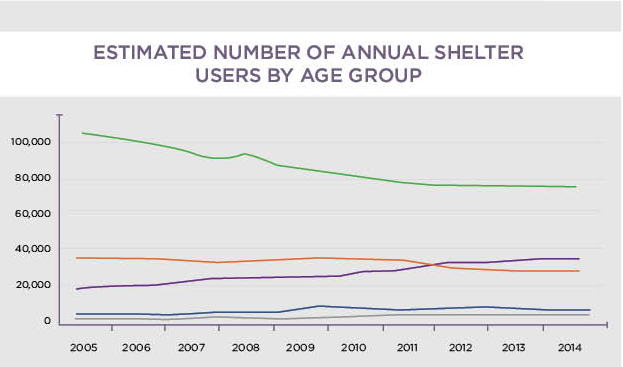 The gender breakdown of shelter users has not changed

Between 2005 and 2014, there has been no change in the percentage of males and females using shelters. In 2014, 72.4% of shelter users were male and 27.3% were female. It should be noted, however, that Violence Against Women shelters have not been included in this study. Females using shelters are, on average, younger than males. The average age for males is 40, compared to 36 for females. Moreover, the percentage of female shelter users decreases for older age groups. Fewer than one in five seniors using shelters are women. 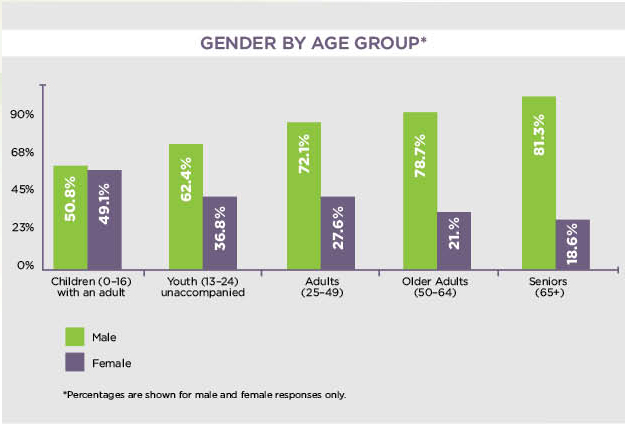 *percentages are shown for male and female responses only.

In 2014, nearly 3,000 shelter users reported having served in the military

About 5% of shelter users reported that they are not Canadian citizens, including 5,036 permanent residents or immigrants, 1,095 refugees and 562 temporary residents (student, work or visitor visa). Refugee shelters are not included in this analysis. Typical shelter stays for non-citizens were about five days longer than for shelter users with Canadian citizenship.

The percentage of shelter users who report Indigenous ancestry varied widely by community, from less than 5% in some suburban communities to over 90% in many northern communities. In each of the communities where data are available, Indigenous people are over-represented in homeless shelters compared to their percentage in the general population.

Figure 9: Rate of shelter use for Indigenous compared to Non-Indigenous people 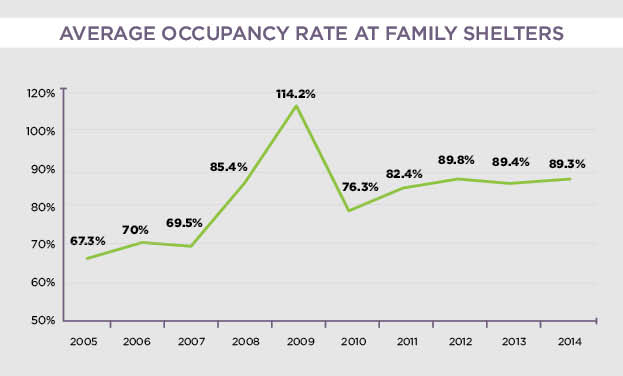 Rising demand for shelter beds in the face of static capacity

As of 2014, the average occupancy rate at Canada’s emergency shelters had risen to over 90% — an increase of almost 10 percentage points since 2005. However, the overall capacity of Canada’s emergency shelter system has not changed significantly. Although the annual number of individuals using shelters has fallen over the 2005 to 2014 study period, shelters are being used more intensely. Overall demand for shelter beds has increased due to longer shelter stays.

While stay lengths have increased since 2005 for all shelter users, there has been a marked increase in stay lengths for families and seniors. The age composition of the shelter-using population has also changed. The number of youths and adults aged 25–49 using shelters has fallen while the number of adults aged 50 and over has increased.

Since April 2014, the Homelessness Partnering Strategy has focused on the Housing First approach, which strives to move individuals, particularly the chronically and episodically homeless, directly into permanent housing. This study covers the period before Housing First was introduced nationally and provides a strong baseline for future research to assess the impact of Housing First on shelter use.

The National Shelter Study 2005–2014: Emergency Shelter Use in Canada, which will include a more in-depth analysis of this data, along with new information from the first coordinated national point-in-time count, will be available in fall 2016.