Office of Infrastructure of Canada
Quarterly Financial Report for the quarter ended June 30, 2019

This quarterly report has been prepared by management as required by Section 65.1 of the Financial Administration Act and in the form and manner prescribed by the Treasury Board. This quarterly report should be read in conjunction with the Main Estimates as well as Budget 2019.

Further information on INFC’s mandate, responsibilities, and programs can be found in INFC’s 2019-20 Main Estimates.

This quarterly report has been prepared by management using an expenditure basis of accounting.  The accompanying Statement of Authorities includes INFC’s spending authorities granted by Parliament and those used by INFC consistent with the Main Estimates and Supplementary Estimates for the 2019-20 fiscal year (FY).  This quarterly report has been prepared using a special purpose financial reporting framework designed to meet financial information needs with respect to the use of spending authorities.

The authority of Parliament is required before monies can be spent by the government.  Approvals are given in the form of annually approved limits through Appropriation Acts or through legislation in the form of statutory spending authority for specific purposes.

INFC uses the full accrual method of accounting to prepare and present its annual departmental financial statements that are part of the departmental performance reporting process.  However, the spending authorities voted by Parliament remain on an expenditure basis.

During the first quarter of 2019-20, the only federal delivery partner for certain sunsetting programs was Transport Canada. 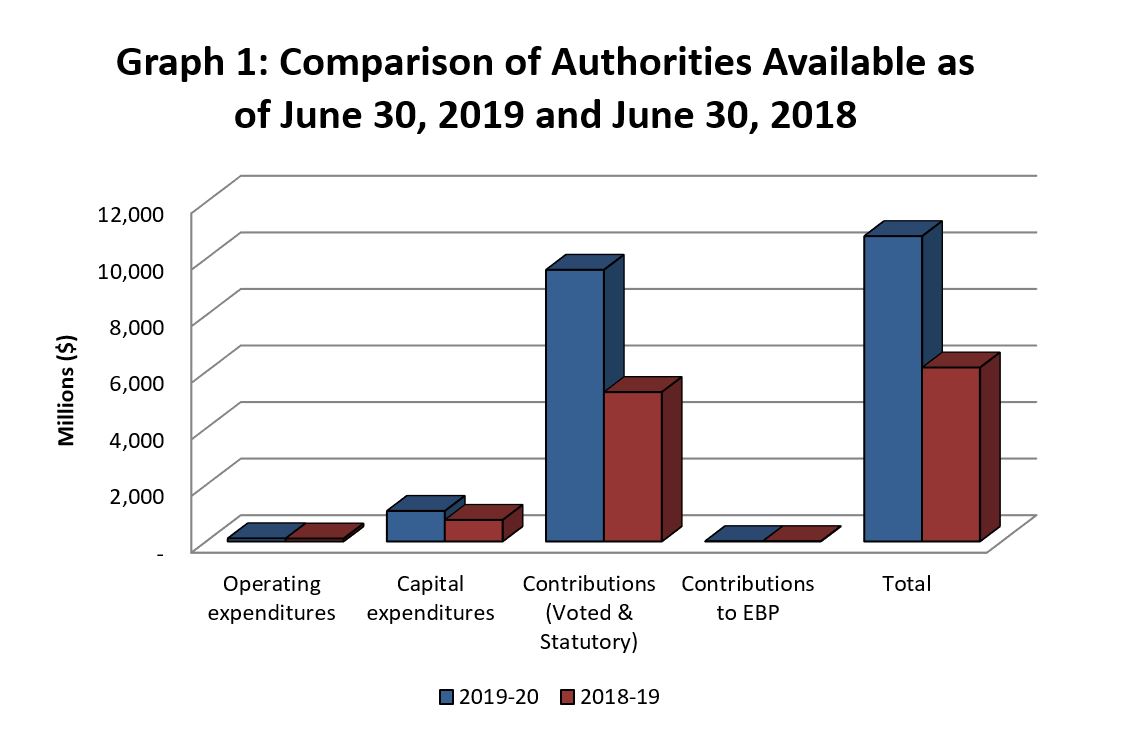 As shown in the Statement of Authorities, INFC’s total authorities available for 2019-20 are $10.8 billion as of the end of Quarter 1 (Q1) and represent a $4.65 billion increase compared to the same quarter in the prior year.

This increase is summarized in the table below:

The sources of significant year-over-year changes in total authorities are summarized as follows: 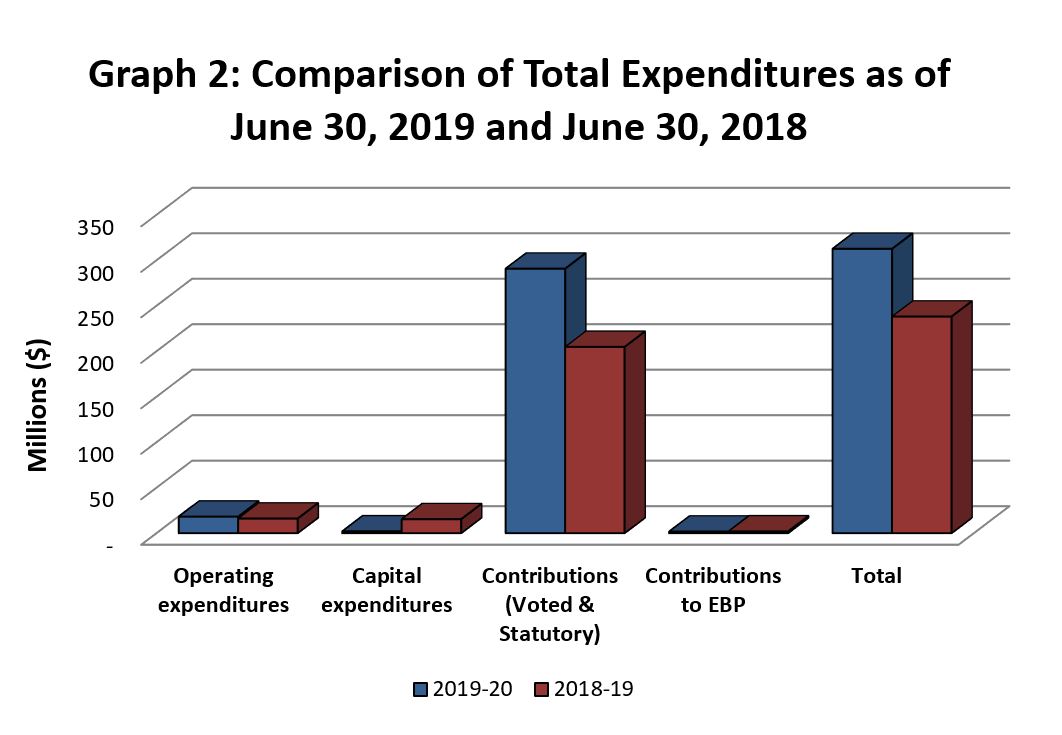 Expenditures at the end of Q1 were $312.6 million, compared to $238.1 million reported in the same period of 2018-19, representing an increase of 31.3% between Q1 of the two years. The source of the relative increase is demonstrated in the tables, graphs and analysis below. 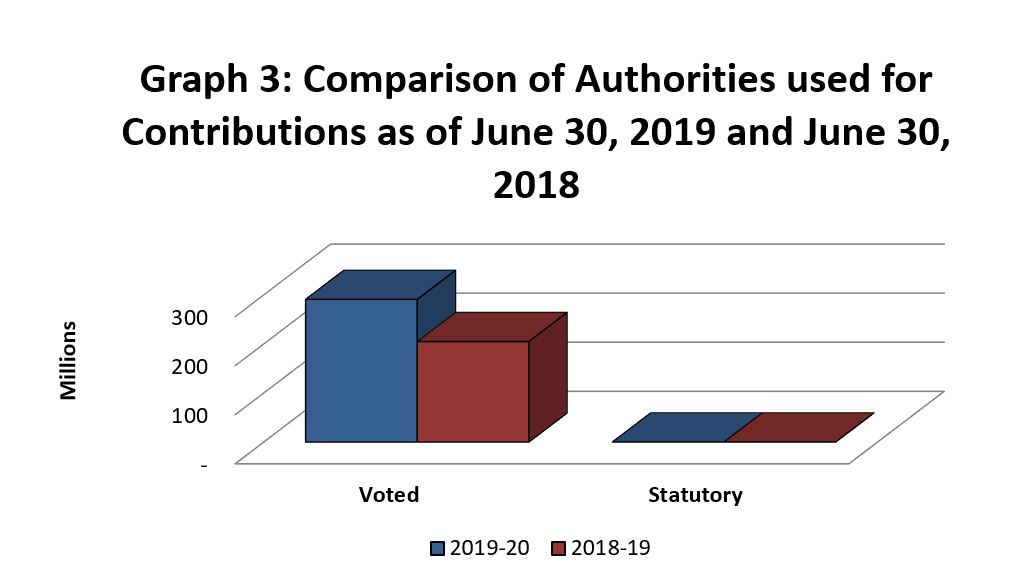 Significant changes in year-to-date contribution expenditures between June 2019 and June 2018 were as follows:

The planned Departmental Budgetary Expenditures by Standard Object are set out in the table at the end of this report. Aggregate year-to-date expenditures in 2019-20 increased by $74.52 million, compared with the same quarter last year. The largest single factor was an increase in transfer payments as explained above.

Most of INFC’s programs are structured in such a way that funding flows from the Department based on requests for reimbursements.  It is important to note that federal spending is not an accurate measure of when the economic activity created by infrastructure spending occurs.  When projects are approved, work begins and economic activity is generated by provinces, territories (PT) and municipalities, which are responsible for implementing projects and incurring costs.  Infrastructure Canada makes the federal contribution only when requested by partners.

There are a variety of reasons that can affect the timing of requests for reimbursements, which can contribute to a variance between planned spending and actual spending. Some projects, once approved, move quickly into the construction phase while others have longer lead times for planning, and local approval processes (e.g. zoning and permitting).  Regardless of how long planning takes or how soon ground can break, eligible costs can be submitted for reimbursement throughout the life of the project.

INFC has been working with provinces and territories on a new approach to transfer payments to better align federal investments with construction activity taking place. A pilot project is currently underway with three provinces under the Investing in Canada Infrastructure Program to test the effectiveness of this new approach in advance of broader implementation.

Over the last three and a half years the Department has been in a state of transformation.  The introduction of new programs and responsibilities has resulted in structural changes to better support the delivery of new business lines, as well as required the department to move to more specialized skills and experience necessary for key positions. INFC is working to ensure it attracts and retains employees with the skill sets and experience necessary to fulfil the department’s evolving mandate.

Infrastructure Canada continues to grow and evolve. Since the last Quarterly Financial Report, the following significant changes have taken place within the department:

Statement of Authorities (unaudited)
(in thousands of dollars)

Statement of Authorities (unaudited)
(in thousands of dollars)