Office of Infrastructure of Canada
Quarterly Financial Report for the quarter ended September 30, 2017

This quarterly report has been prepared by management as required by Section 65.1 of the Financial Administration Act and in the form and manner prescribed by the Treasury Board. This quarterly report should be read in conjunction with the Main Estimates and Supplementary Estimates (A), as well as Budget 2017.

Further information on INFC's mandate, responsibilities, and programs can be found in INFC's 2017-18 Main Estimates.

This quarterly report has been prepared by management using an expenditure basis of accounting. The accompanying Statement of Authorities includes INFC's spending authorities granted by Parliament and those used by INFC consistent with the Main Estimates and Supplementary Estimates for the 2017-18 fiscal year (FY). This quarterly report has been prepared using a special purpose financial reporting framework designed to meet financial information needs with respect to the use of spending authorities.

During the first quarter of 2017-18, the only federal delivery partner for certain sunsetting programs was Transport Canada.

As shown in the Statement of Authorities, INFC's total authorities available for 2017-18 are $7.042 billion as of the end of Quarter 2 (Q2) and represent a $1.737 billion increase compared to the same quarter in the prior year. This increase is summarized in the table below:

The sources of significant year-over-year changes are as follows:

Expenditures at the end of Q2 were $1.330 billion, compared to $1.442 billion reported in the same period of 2016-17, representing a decrease of 7.8% between the two years. The source of the relative decrease is demonstrated in the tables, graphs and analysis below.

The sources of significant year-over-year changes are as follows:

Operating Expenditures
Further details are provided later in this report, by standard object. 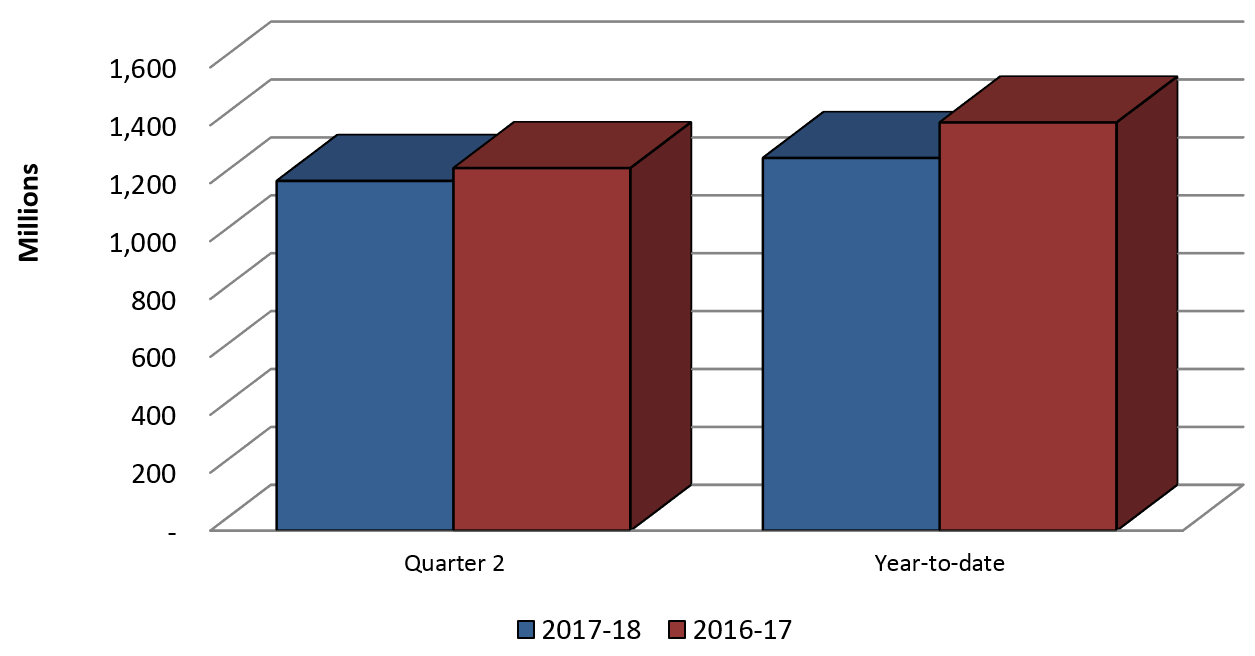 Significant changes in year-to-date contribution expenditures between September 2017 and September 2016 are as follows:

The sources of the significant year-over-year changes in program expenditures are summarized as follows:

The planned Departmental Budgetary Expenditures by Standard Object are set out in the table at the end of this report. Aggregate year-to-date expenditures in 2017-18 decreased by $111.9 million, compared with the same quarter last year. The largest dollar change was a reduction in Transfer Payments as explained above.

The source of significant year-over-year changes is summarized as follows:

Overall, Infrastructure Canada has spent 18.9% of its current Total Authorities as of September 30, 2017, compared with 27.2% at the end of Q2 of the previous fiscal year.

In most cases, INFC funds projects via a Contribution Agreement or Integrated Bilateral Agreement between Canada and a Provincial/Territorial (PT) government. Those PT governments enter into their own agreements with municipalities, who are ultimately responsible for project management and construction of the infrastructure.

Most of INFC's programs are designed to flow federal funds to PTs after they have submitted their claims for actual costs incurred by a project. Only once INFC receives a claim can the funding flow to the PT in order to pay the federal share. It should be noted that the pace of the claims submitted to INFC does not match the economic activity on a project as spending can happen long before claims are received. For this reason, INFC relies on PTs and other partners to submit claims in a timely manner.

There are a variety of reasons that can explain the timing of claims being submitted, which in turn contribute to a variance between planned spending and actual spending profile. There is often a time lag between when the project was approved or announced to the actual start date of construction as infrastructure projects typically require a significant amount of upfront planning, design and procurement. Even after construction has started, sometimes project delays due to factors beyond the control of funding recipients such as, inclement weather or weather events, may delay the submission of claims. In other cases, partners may not have an immediate need or urgency to submit claims due to the financial planning within their own jurisdictions. In general, INFC encourages PTs to submit claims in a timely manner to ensure the flow of funding as planned. Parliamentary authority to spend typically expires at the end of the fiscal year. When claims are not submitted as expected in a given fiscal year as planned, INFC seeks to reprofile the authorities so that the funding committed to specific projects continues to be available in future years.