Office of Infrastructure of Canada
Quarterly Financial Report for the quarter ended December 31, 2016

This quarterly report has been prepared by management as required by Section 65.1 of the Financial Administration Act and in the form and manner prescribed by the Treasury Board. This quarterly report should be read in conjunction with the Main Estimates and Supplementary Estimates (A) and (B), as well as Budget 2016.

Note that this report differs from the 2016-17 Main Estimates with respect to total departmental funding, reflecting the following adjustments since the Main Estimates were tabled: current year Supplementary Estimates (A) and (B) funding received, which included Operating and Contribution funding linked to new and existing programs as outlined in Budget 2016.

The federal delivery partners for certain sunsetting programs are:

This section highlights the significant items that contributed to the change in resources available for use from 2015-16 to 2016-17 and in actual expenditures from December 31, 2015 to December 31, 2016. 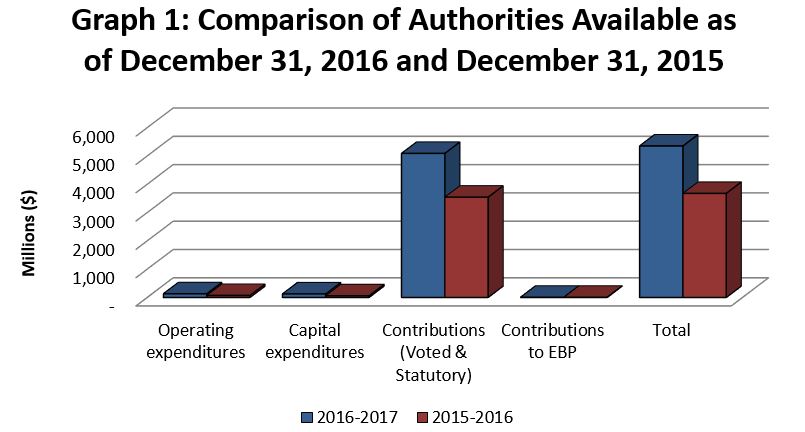 As shown in the Statement of Authorities, INFC's total authorities available for 2016-17 are $5.353 billion as of the end of Quarter 3 (Q3) and represent a $1.675 billion increase compared to the same quarter in the prior year. This increase is summarized in the table below:

Expenditures at the end of Q3 were $2.356 billion, compared to $2.537 billion reported in the same period of 2015-16, representing a decrease of 7.1% between the two years. The source of the relative decrease is demonstrated in the tables, graphs and analysis below. 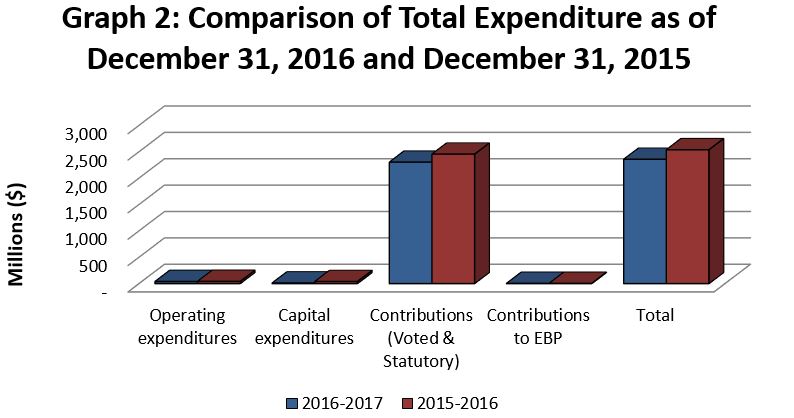 Minister's Salary and Car Allowance
The increase is due to the fact there were no expenditures for the Minister's salary and car allowance at the end of Q3 in 2015-16.

Operating Expenditures
Further details are provided later in this report, by standard object.

Capital
The reduction in capital expenditures is primarily due to land acquisition for the New Champlain Bridge Corridor Project that occurred during 2015-16.

Transfer Payments – Contributions
Year-to-date Contributions (Voted and Statutory) expenditures as of the end of Q3 have decreased in comparison to last year. 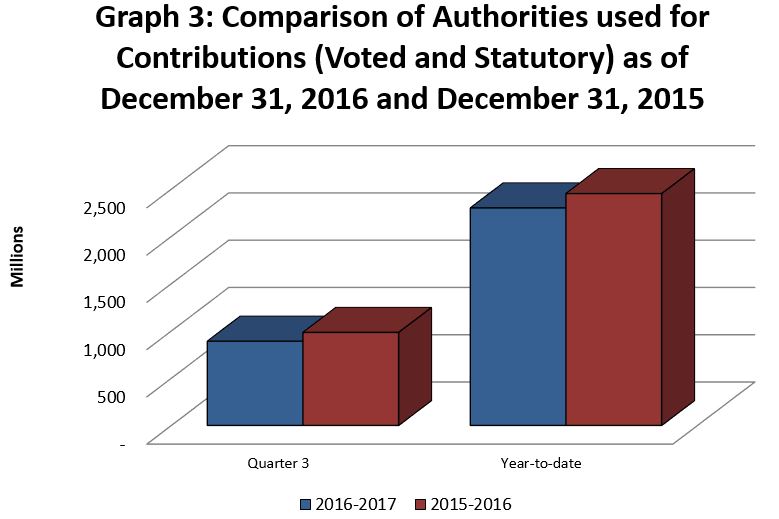 Significant changes in year-to-date contribution expenditures between December 2016 and December 2015 were as follows:

The planned Departmental Budgetary Expenditures by Standard Object are set out in the table at the end of this report. Aggregate year-to-date expenditures in 2016-17 decreased by $181.3 million, compared with the same quarter last year. The largest single factor was a reduction in Transfer Payments as explained above.

Overall, Infrastructure Canada has spent 44.0% of its current Total Authorities as of December 31, 2016, compared with 68.9% at the end of Q3 of the previous fiscal year.

There are challenges from several sources impacting the ability of the Department to deliver on current programs, the New Building Canada Fund (NBCF), and the new programs under Budget 2016 and the Fall Economic Statement 2016. Particularly:

These factors could lead to delays in submissions, approvals and provision of timely infrastructure funding, creating the possibility that the pattern of funding approved may not reflect the actual pattern of work. INFC has streamlined NBCF programs (e.g., expanded funding categories, removal of P3 screen) and continues to review and approve NBCF project proposals and is working diligently with its stakeholders on the negotiation of contribution agreements to accelerate the delivery of the NBCF. The Department is also ensuring that it has in place strategies, plans and resources to implement the Investing in Canada Plan, including bilateral agreements for the implementation of the Phase 1 of the Plan, which have now been signed with all provinces and territories.

Factors such as the lack of quality data on infrastructure, limited capacity, and new programs' complexity in terms of horizontal coordination among several federal departments, lead to challenges for INFC to being able to report adequately on its policies' and infrastructure investments' outcomes. This, in turn, may negatively impact its ability to tell Canadians a compelling performance story, to respond to central agencies' new reporting requirements and expectations, as well as to properly evaluate its programs and ensure continuous improvements. INFC continues to engage and work with federal partners, other levels of government and stakeholders to improve the quality of infrastructure data, to achieve consensus on policy outcomes, as well as to build reporting capacity. Through the implementation of Phase 1 of the new infrastructure plan, INFC has secured funding for a data development initiative with Statistics Canada and two new programs, namely the Asset Management Fund and the Capacity Building for Climate Change Challenges, will support improved asset management practices and related data collection.

The integrity of the Champlain Bridge could be compromised earlier than expected, leading to its complete or partial closing before the planned new bridge is in service. This could result in significant overtime, pressure on capacity, securing approvals to move money to earlier years in the fiscal framework and re-shifting some priorities. To address these risks, the Department is relying on the Jacques Cartier and Champlain Bridges Incorporated's (JCCBI) extensive project plan that covers the repair, maintenance and operation of its structures. JCCBI was allocated funding for 2014-2019 through Budget 2014 and other sources to support its comprehensive project plan that covers the repairs, maintenance and operation of all structures under its responsibility, including the Champlain Bridge. Further, there are working groups and interdepartmental teams who will be regularly monitoring the New Champlain Bridge Corridor project to ensure that the private partner conducts the work as agreed under the terms of the Project Agreement in order to open the new bridge on December 1st, 2018 as planned.

The Gordie Howe International Bridge Project will create a new international crossing between Windsor, Ontario and Detroit, Michigan. The procurement and delivery of the new international crossing will be managed by the Windsor-Detroit Bridge Authority (WDBA), a federal Crown corporation, and a private sector partner will be responsible for its design, construction, operation and maintenance. A project of this scope has many complexities, and INFC is working diligently with the WDBA to support ongoing management and mitigation of project risks.

The number of current and future large scale whole-of-government initiatives (i.e. projects like data centre consolidation, new pay system, financial management transformation, the shared travel system, migration of web sites to Canada.ca, and preparation for moving to GCDocs document management) may impact the Department's ability to react quickly and nimbly to increased internal business pressures that require timely support services and solutions, and ongoing service availability. The focus of the risk responses is to ensure departmental readiness for new infrastructure programs and the continued delivery of timely IMIT, HR, Finance and other enabling services. INFC will also be working with Shared Services Canada and Public Services and Procurement Canada to ensure they are aware of the Department's top priorities.

There have been no significant changes in relation to operations, personnel and programs at Infrastructure Canada during Q3.