This quarterly report has been prepared by management as required by Section 65.1 of the Financial Administration Act and in the form and manner prescribed by the Treasury Board. This quarterly report should be read in conjunction with the Main Estimates, Supplementary Estimates and the Quarterly Financial Reports for the quarters ended June 30, 2011 and September 30, 2011.

This quarterly report has been prepared by management using an expenditure basis of accounting. The accompanying Statement of Authorities includes the Infrastructure Canada spending authorities granted by Parliament and those used by the Department consistent with the Main Estimates for the 2011-12 fiscal year (FY). This quarterly report has been prepared using a special purpose financial reporting framework designed to meet financial information needs with respect to the use of spending authorities.

When Parliament is dissolved for the purposes of a general election, Section 30 of the Financial Administration Act authorizes the Governor General, under certain conditions, to issue a special warrant authorizing the government to withdraw funds from the Consolidated Revenue Fund. A special warrant is deemed to be an appropriation for the FY in which it is issued.

Infrastructure Canada uses the full accrual method of accounting to prepare and present its annual Departmental financial statements that are part of the Departmental performance reporting process. However, the spending authorities voted by Parliament remain on an expenditure basis.

This section highlights the significant items that contributed to the net decrease in resources available for use from 2010-11 to 2011-12 and actual expenditures from December 31, 2010 to December 31, 2011.

During 2010-11, the second year of the Economic Action Plan (EAP) implementation, Infrastructure Canada shifted primary efforts from reviewing and approving projects and committing funds, to focusing on oversight and delivery of project funding. In FY 2011-12, management is reviewing various options to transition from its focus on delivering the EAP to a returned focus on longer-term programming including the Building Canada Fund and Gas Tax Fund. 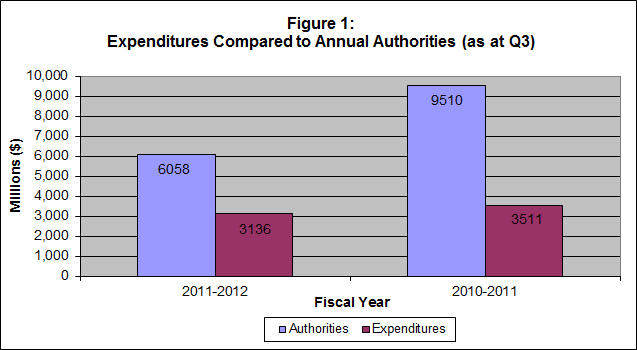 Significant Changes on the Statement of Authorities table

As can be seen in Figure 1, in the current year, Infrastructure Canada has $6.1B in authorities at Quarter 3 (Q3), compared to $9.5B at Q3 in the prior year, representing a decrease of approximately 36%. This decrease can be explained primarily by the decrease of $3.3B in Contributions' authorities, relating to the planned completion of Canada's Economic Action Plan. On December 2, 2010, the deadline for projects funded by the Infrastructure Stimulus Fund and the Building Canada Fund-Communities Component Top-Up, two of the programs under the Economic Action Plan, was extended from March 31, 2011 to October 31, 2011. Due to the timing of this announcement, $1.2B in overall authorities was re-profiled to FY 2011-12 through the Supplementary Estimates (B) process, approved on December 5th, 2011. Between Q2 and Q3 of the current year, this resulted in an increase of $1.2B to the department's total authorities available for use ($1.19B in Contributions' authorities available for use and $9.7M to the Operating expenditure authorities available for use).

The Department has spent 51.8% of its authorities in the current FY, compared to 42.3% at the same point in the prior FY (adjusting for the re-profile of $1.2B described above). There is a slightly higher rate of transfer payments' spending occurring in the first three quarters of the current FY, compared to last FY where the majority of transfer payments' spending occurred in the latter part of the fiscal year. This variance can be explained mainly by an increase in submitted and paid claims for projects completed under the Economic Action Plan, which ended on October 31st, 2011 and of which the deadline for claims' submission is January 31st, 2012.

Infrastructure Canada's Operating expenditure authorities available for use increased by $4.2M between Q2 and Q3, as a result of the funding of requirements for Personnel Salary and Benefits ($2.1M) and the receipt of an Operating Budget Carry-Forward ($2.1M) from the prior FY. This amount of $4.2M has been added to the 'Planned Expenditures for the year ending March 31, 2012' under Personnel ($2.1M) and Other subsidies and payments ($2.1M).

There are significant variances among the 2010-11 and 2011-12 'Planned expenditures by standard object,' including Transportation and communications, Information, and Repair and maintenance. The planning methodology used to establish the 'planned expenditures by standard object' was based on historical expenditures prorated to 2011-12 appropriations. Variances are due to the fact that as the EAP winds down, the spending pattern in 2011-12 is not holding true to the planning methodology used for Operating expenditures.

In Budget 2010 – Leading the Way on Jobs and Growth, the Minister of Finance announced that the operating budgets of departments, as appropriated by Parliament, would be frozen at their 2010-11 levels for the years 2011-12 and 2012-13. Infrastructure Canada has no ongoing base level of funding for administration and operating costs. Its operating requirements have always been funded entirely from infrastructure programs and related administrative costs are confirmed by Treasury Board on an annual basis.

Without ongoing operating funding, it is challenging to predict how a budget freeze will affect Infrastructure Canada's operations.

While the department works continually with its partners to ensure that forecasts are as accurate as possible, and to re-profile Infrastructure Canada's funding to meet the needs of its partners, there remains a risk that actual transfer payment expenses will be less than forecast. Within Q3 of the current year, the unique spending profile for contribution programs (see Highlights of Fiscal Quarter) will indicate just over half of Infrastructure Canada's contributions' authorities as being spent at three-quarters of the way through the FY. The majority of Infrastructure Canada's transfer payments are expected to occur in the latter part of the FY; however there is always some uncertainty when forecasting cash requirements to Parliament.

It is important to note that the department's cash flows almost always lag behind the actual rate of construction of the projects it funds. This is a key risk-management approach for the department, one that ensures that it only pays for work that has already been undertaken. In many cases, recipients choose to wait until completion of the project before submitting requests for payment. Upon accepting these requests, the department pays within 30 days. In addition, there are generally clauses in its funding agreements that allow Infrastructure Canada to withhold a project's final payment until the recipient has fulfilled all of its obligations to the department.

Infrastructure Canada is taking steps to minimize the size of future contribution funding lapses and improve its expenditure forecasting over the long-term. This issue has been raised with provincial/territorial Ministers and Deputy Ministers, and Infrastructure Canada's federal delivery partners. Particular emphasis is being placed on ensuring that:

However, funding lapses are unlikely to be completely eliminated due to the complex nature of infrastructure projects. In particular, such projects can encounter legitimate delays related to such factors as environmental assessments, weather, and shortages in materials and labour.

***Includes only Authorities approved for use by Parliament at quarter-end.