Ministerial Portfolio: Minister of Infrastructure, Communities and Intergovernmental Affairs, and Minister of the Economic Development Agency of Canada for the Regions of Quebec

Furthermore, as per Order in Council P.C. 2014-144 dated February 10, 2014, ministerial responsibility for the Federal Montreal Bridges group, which includes the new bridge for the St. Lawrence (NBSL) corridor project and the Jacques Cartier and ChamplainBridges Incorporated (JCCBI) was transferred from the Minister of Transport to the Minister of Infrastructure, Communities and Intergovernmental Affairs, and Minister of the Economic Development Agency of Canada for the Regions of Quebec, effective February 13, 2014.

Year Established: The Office of Infrastructure of Canada was established in 2002.

As shown in Figure 1, Infrastructure Canada is the main department responsible for federal efforts to enhance Canada's public infrastructure. This is accomplished through three main activities: investments in provincial, territorial and municipal assets; engagement in key partnerships with the provinces, territories, municipalities and the private sector; and the development and implementation of sound policies. Established in 2002, the Department ensures that Canadians benefit from world-class public infrastructure from coast to coast to coast.

In addition to the above core responsibilities, on February 13, 2014, ministerial responsibility for the Federal Montreal Bridges group, which includes the new bridge for the St. Lawrence corridor project and oversight of the Crown Corporation, the Jacques Cartier and Champlain Bridges Incorporated, was transferred from Transport Canada to Infrastructure Canada. 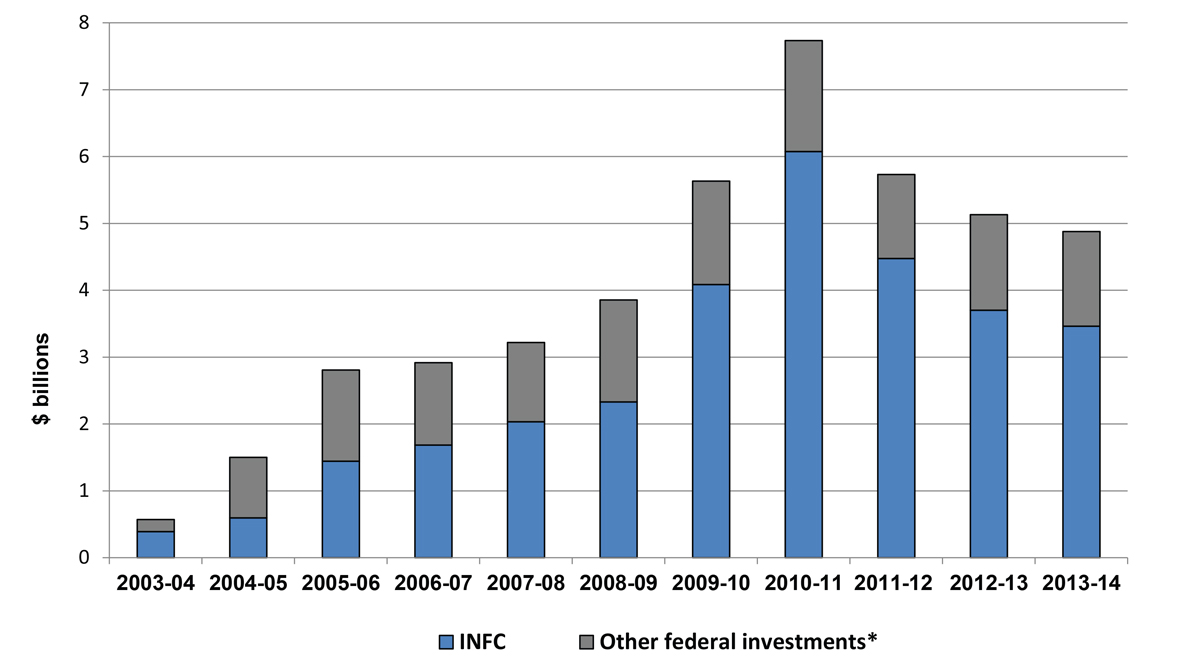 Text description of graph for Figure 1

Text description of graph for Figure 2

The Importance of Public Infrastructure Investments

Canada's public infrastructure forms the backbone of the nation and contributes to prosperity. From the water we drink to the roads we drive on, infrastructure benefits all Canadians every day. Quality of life, prospering communities and a resilient economy depend, in large part, on our systems of public infrastructure. Public infrastructure investments support economic growth and productivity by allowing goods and people to move more efficiently, facilitating trade activities, promoting local and regional development and supporting job creation.

Figure 3: Average Age and Age as a Percentage of Useful Life of Core Public Infrastructure

Text description of graph for Figure 3 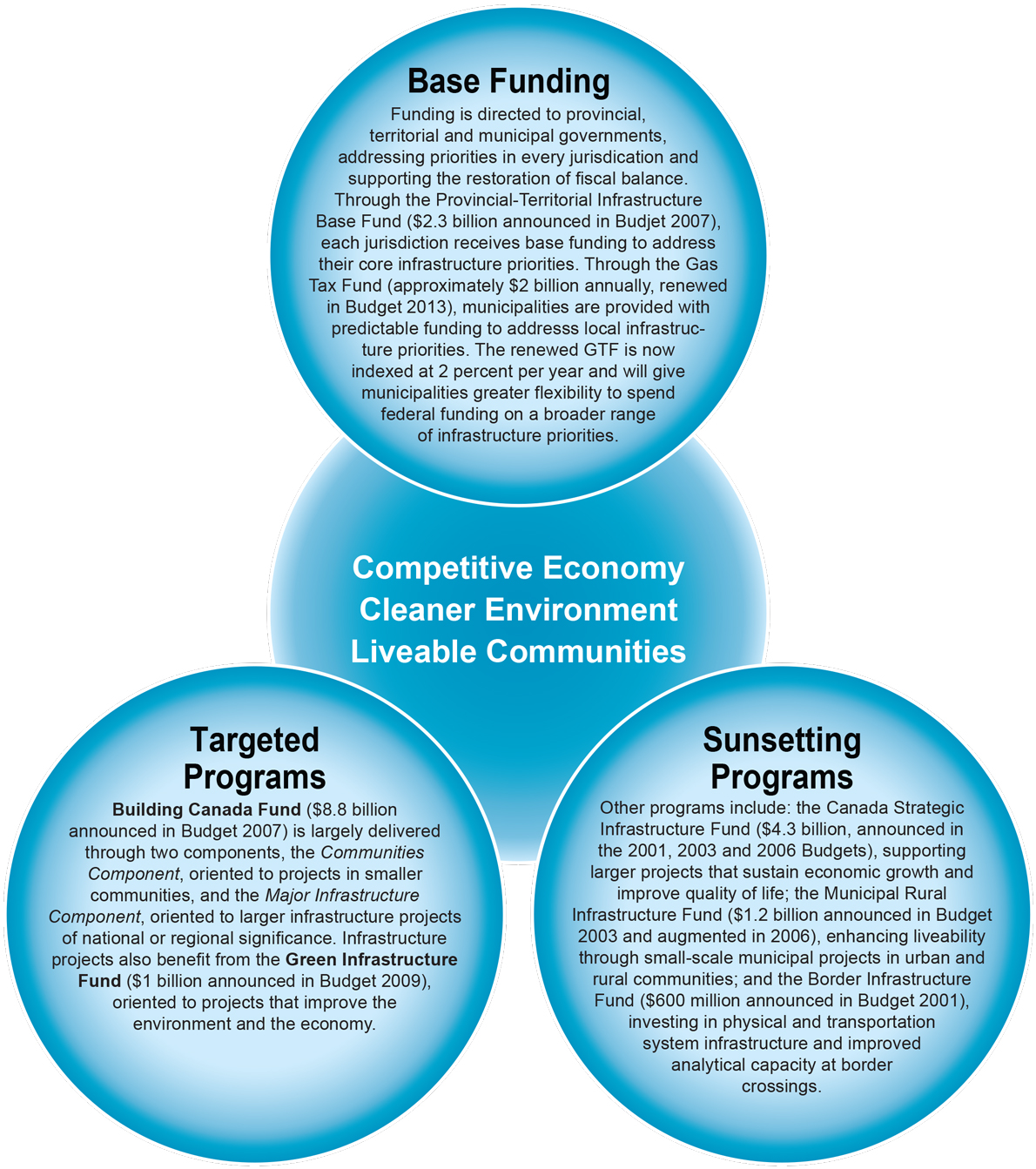 * The allocations for Transfer Payment Programs presented on this page are the original allocations announced by the Government of Canada, and do not reflect subsequent adjustments.

In 2013-2014, Infrastructure Canada's Program Alignment Architecture (PAA) structure included two Strategic Outcomes and nine Programs, as well as Internal Services2 to support its activities. The Programs below are discussed in detail in Section II of this report.

Provinces, territories and municipalities have federal financial support for their infrastructure priorities.

Funding for quality, cost-effective public infrastructure that meets the needs of Canadians in a competitive economy, a cleaner environment and liveable communities is provided.

Program that Supports All Strategic Outcomes:

In the Performance Summary Tables for Strategic Outcomes and Programs, Section 1.6 of this report, Infrastructure Canada has also included a third Strategic Outcome which was formed by the programs under the Economic Action Plan announced in January 2009. This Strategic Outcome: "construction-ready infrastructure projects are provided with federal support", has been included in these tables as they contain figures for 2011-2012, the last year that expenses were incurred under the 2009 Economic Action Plan. Since the tables require that the Actual Spending for 2011-2012, 2012-2013, and 2013-2014 be shown, this third Strategic Outcome is necessary so that the totals can be reconciled.

The programs under the Strategic Outcome 3 are not discussed in Section II of this report.

Summary of Progress Against Priorities

In September 2013, Treasury Board approved the terms and conditions of the permanent, renewed and indexed Gas Tax Fund (GTF). Following this approval, administrative agreements were shared with all jurisdictions in early November, formally launching negotiations to finalize bilateral agreements in a time that would ensure an uninterrupted transfer of GTF funds to the provinces and territories in the 2014-2015 fiscal year.

The Department, in collaboration with funding partners, has made progress to continue to support program implementation and oversight. Policies, procedures and tools have been developed and implemented to support sound governance and monitoring of programs. A particular focus was given to working on sunsetting programs to ensure that they can be completed in a timely fashion in support of the Department's Strategic Outcomes. This has allowed the Department to meet its responsibility to provide funding for infrastructure investments that contribute to a stronger economy, a cleaner environment and prosperous communities. The Department recognizes that closing out sunsetting programs is a challenge and moving forward, it will continue to work with stakeholders to ensure a timely conclusion to these programs.

Infrastructure Canada is responsible for the delivery of two funds under the New Building Canada Plan, namely the renewed and indexed Gas Tax Fund and the New Building Canada Fund. The renewed Gas Tax Fund will provide $21.8 billion over 10 years in up-front, predictable, long-term funding for Canadian municipalities to help them build and revitalize their public infrastructure. Gas Tax Fund investments will continue to support environmental objectives of cleaner air, cleaner water and reduced greenhouse gas emissions, but will also help achieve the broad national objectives of productivity and economic growth, and strong cities and communities.

The New Building Canada Fund supports economic growth and productivity, and quality of life objectives, while ensuring the best value for tax payers. Eligible project categories have been streamlined to focus on projects that have a greater economic impact; the federal cost-sharing ratio has been reduced to leverage greater funding from partners; and large infrastructure projects will be delivered in the most cost-effective manner by considering the use of a public-private partnership (P3) procurement approach.

While Infrastructure Canada was not part of the Deficit Reduction Action Plan (DRAP), it continued to reduce its operating costs in 2013-2014. Throughout the year, the Department worked with central agencies to determine the operating resources needed to implement existing and new programs for the next ten years.

In 2013-2014, the following three risks were ranked the highest in terms of achieving Infrastructure Canada's strategic outcomes.

Infrastructure Canada has recently completed its 2014 Corporate Risk Profile and has implemented additional risk responses to effectively manage its changing risk environment. These risk management activities ensure that the Departmental Management Committee is aware of emerging risk drivers and offers an opportunity to implement new measures to achieve departmental priorities and advance its Strategic Outcomes. Finally, risk management is fully integrated into Infrastructure Canada's decision-making processes, and the lessons learned from regular risk update exercises are embedded in the Department's culture at all working levels, enhancing program efficiency and stewardship.

While ensuring a smooth transition for municipalities to the renewed GTF in 2014, Infrastructure Canada continued to deliver approximately $2 billion in 2013-2014 through this program, providing municipalities with a stable and predictable source of funding for their infrastructure priorities.

Further, Infrastructure Canada continued to administer existing programs, working collaboratively with provinces, territories and municipalities to commit the remaining funding under ongoing programs and to ensure the timely completion of projects. Overall, in 2013-2014 Infrastructure Canada made significant investments towards the construction and improvement of public infrastructure across the country, spending over $3.5 billion while providing prudent stewardship and oversight of its programs to ensure ongoing value for taxpayers.

1.6.2 Alignment of Spending with the Whole-of-Government Framework

[*] Note: Totals in this table include only the contributions made under the Strategic Outcomes, and do not include expenses made under Internal Services.

In 2013-2014, Infrastructure Canada's actual spending was over $3.5 billion on infrastructure investments under its Programs to meet the expected program results and contribute to its Strategic Outcomes.

Text description of graph for Figure 4

Overall, Figure 4 highlights the stability and predictability of infrastructure funding provided through the Gas Tax Fund (GTF) with spending at around $2 billion a year. The GTF is the only transfer payment program reflected in this graph not being considered as a "Sunset Program".

In 2014-2015 and beyond, the Department will continue to flow funding under its existing transfer payment programs, as well as under the New Building Canada Fund (NBCF). Of note, this report and Figure 4 do not include planned spending for the NBCF since it was not part of Infrastructure Canada's 2013-2014 Program Alignment Architecture. As such, the graph shows a general decrease in spending levels under "Sunset Programs" since existing programs, including programs under the 2007 Building Canada plan, are winding down. Planned spending for the NBCF will be reflected in the Department's future reports.

The peak in spending in 2011-2012 reflects the successful completion of two Infrastructure Canada programs under the 2009 Economic Action Plan (EAP): the Infrastructure Stimulus Fund and the Building Canada Fund-Communities Component Top-Up.

For information on Infrastructure Canada's organizational Votes and statutory expenditures, consult the Public Accounts of Canada 2014v on the Public Works and Government Services Canada website.

[1] Infrastructure Canada receives Capital and Repair Expenditures Survey subset data on an annual basis from Statistics Canada. The new dataset received in 2014 is a more comprehensive dataset with better coverage of industries, and their establishments, engaged in operations and services that invest in public infrastructure, including crown corporations and provincial agencies. In addition, annual revisions are made based on survey revisions and national account adjustments. Although the new data presents slight differences than in previous departmental Estimate documents, there is no change in terms of overall infrastructure rejuvenation trends.

[4] There was no 2015-2016 Planned Spending for the Provincial-Territorial Infrastructure Base Fund in the 2014-2015 Report on Plans and Priorities. All funds available under this program have been committed as of March 31, 2014.

[9] The 2014-2015 and 2015-2016 Planned Spending amounts for Internal Services only reflect opening balances of remaining funds. When the 2014-2015 Report on Plans and Priorities was created, operating funding for Infrastructure Canada had not yet been confirmed for 2014-2015 and beyond, hence there were no Main Estimates amounts available.

In March 2014, Infrastructure Canada received Treasury Board approval for operating funding for the next ten years. Funding for 2014-2015 was obtained through 2014-2015 Supplementary Estimates.

[10] Infrastructure Canada's Internal Services' Actual Spending in 2013-2014 does not include expenses for the new bridge for the St. Lawrence corridor project, as Transport Canada incurred all internal services costs for 2013-2014.