Section 72 of the Act requires the head of every federal government institution to submit an annual report to Parliament on the administration of the Act during the fiscal year. This report outlines Infrastructure Canada's accomplishments in carrying out its access to information responsibilities and obligations during the 2017-2018 reporting period.

The portfolio includes the following:

As the federal lead for the Investing in Canada plan, Infrastructure Canada coordinates with 13 other federal departments as well as organizations to advance the Government of Canada's ambitious $180 billion Plan. In 2017-2018, the department began negotiations with provinces and territories for the Integrated Bilateral Agreements while continuing to administer older infrastructure programs such as the Building Canada Fund, New Building Canada Fund, and Gas Tax Fund. Other federal departments and agencies administering infrastructure funding programs outlined in the Investing in Canada plan are:

Most requests received by Infrastructure Canada involve other federal institutions, other levels of government and third parties. Extensions are often required to obtain recommendations regarding the disclosure of third party information. The ability of the department to meet the extended statutory deadlines is often dependent on the ability of the consulted organization to respond within the expected time frame.

Infrastructure Canada expects an increase in the total number of pages to be processed in 2018-2019 due to its high profile role in the following areas:

Responsibility for processing requests received under the Access to Information Act rests with the Deputy Minister, the Associate Deputy Minister, Assistant Deputy Ministers and the ATIP Coordinator for the department (as per Annex “A”). The ATIP Division is part of the Corporate Services Branch.

As of March 30, 2018, the unit is staffed with two teams: 1) Operations; and, 2) Policy, Privacy and Governance. The Operations team is responsible for the administration of the Access to Information Act. It is comprised of one senior analyst and three junior analysts. The Policy, Privacy, and Governance team is responsible for all corporate activities relating to the Access to Information Act. The team is comprised of one team leader and one senior analyst.

The annual statistical report for fiscal year 2017-2018 is provided in Annex “B”.

In 2017-2018, the department received one hundred and sixty-nine (169) requests made pursuant to the Access to Information Act. When combined with the thirty four (34) requests carried over from 2016-2017, Infrastructure Canada was responsible for processing a total of two hundred and three (203) requests during this reporting period.

Members of the media make up the largest group of requesters, followed by those who decline to identiy, business, organization, academia, and public. The breakdown is as follows: 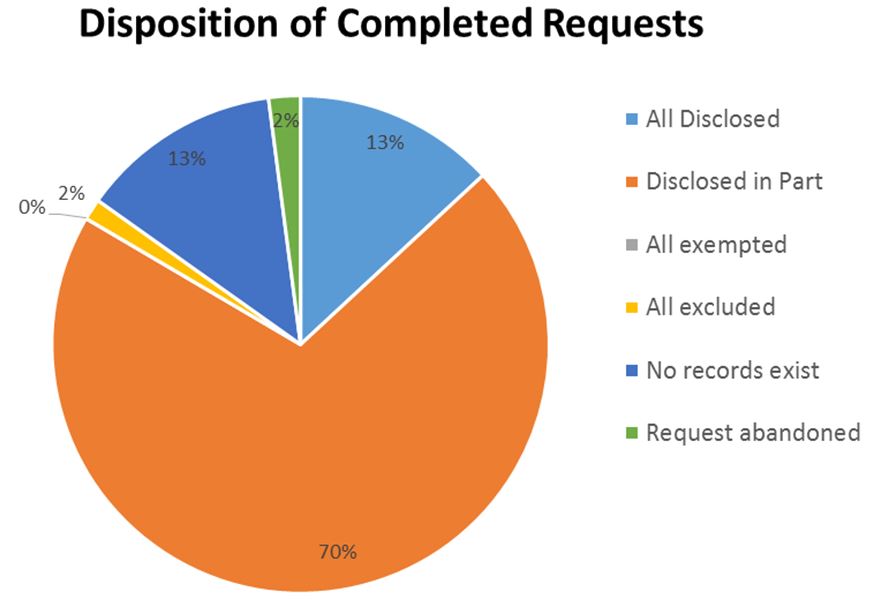 Infrastructure Canada processed approximately 39% of requests within the first 30 days. Time required to process the requests is summarized below: 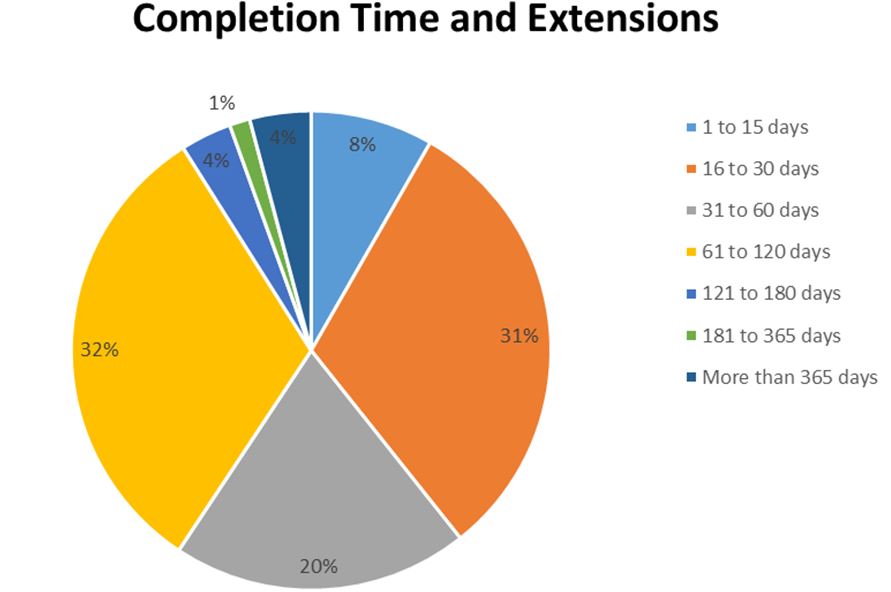 The department found it necessary to extend the timeframe in seventy-eight (78) instances. Eight (8) were extended in order to not unreasonably interfere with the operations of the institution, sixty-five (65) in order to conduct external consultations, five (5) were extended due to third party notifications.

Consultations received from other government institutions and organizations

Table 8 - Consultations received from other government institutions and organizations

During the fiscal year, the ATIP Division offered informal training and briefing sessions to Infrastructure Canada. These sessions reinforced the importance of the Access to Information Act as well as employees' role as public servants to ensure compliance with the legislative requirements. The ongoing training format is delivered in collaboration with Corporate Information Management and focuses on real-life situations in a workshop setting as opposed to delivering lectures on an overview of the Access to Information Act.

During the fiscal year there were no new or revised institution-specific policies, guidelines and procedures related to access to information that were implemented in the institution.

During the reporting period, there were five (5) registered complaints with the Office of the Information Commissioner of Canada. One file was resolved; there are currently four (4) outstanding.

During the reporting period, there were no applications for judicial review filed with the Federal Court.

No requests for translation were received during fiscal year 2017-2018.

The costs associated with the administration of the Access to Information Act and human resources, during the reporting period, can be summarized as follows:

Infrastructure Canada takes its responsibilities under the Access to Information Act very seriously and will continue to respond to the needs of the requesters as effectively and efficiently as possible.

Annex B: Statistical Report on the Administration of the Access to Information Act at Infrastructure Canada in 2017-2018

Original signed November 15, 2017 by the Deputy Head of Infrastructure and Communities, Kelly Gillis

Note: All requests previously recorded as "treated informally" will now be accounted for in this section only.

2.5.2 Relevant pages processed and disclosed by size of requests

2.6.1 Reasons for not meeting statutory deadline

2.6.2 Number of days past deadline

3.1 Reasons for extensions and disposition of requests

Part 5: Consultations Received From Other Institutions and Organizations

5.1 Consultations received from other Government of Canada institutions and organizations

5.2 Recommendations and completion time for consultations received from other Government of Canada institutions

5.3 Recommendations and completion time for consultations received from other organizations

Part 9: Resources Related to the Access to Information Act

Enquiries regarding this document may be directed to the Access to Information and Privacy Office, at the following coordinates: