Minister of Rural Economic Development
The House of Commons
Ottawa, Ontario K1A 0A6

Please accept my congratulations on your appointment as Minister of Rural Economic Development. On behalf of the Infrastructure Canada team, I would like to welcome you to the Department. We are here to provide you with evidence-based, non-partisan advice, and support you in delivering your important mandate.

There currently exists a wide array of programs and policies to support rural Canada, delivered across a significant number of federal departments and agencies, including the Regional Development Agencies located across Canada. Provinces, territories, municipalities, academia, the private sector and Indigenous organizations are also actively engaged in rural economic development.

As Minister of Rural Economic Development, you will have a real opportunity to better the lives of rural Canadians. You will hear directly from Canadians living and working in rural Canada, and gain an even stronger appreciation for their challenges, concerns, and areas of opportunity. Your voice at the Cabinet table will also be an important element in ensuring that rural perspectives are considered in federal decision-making. 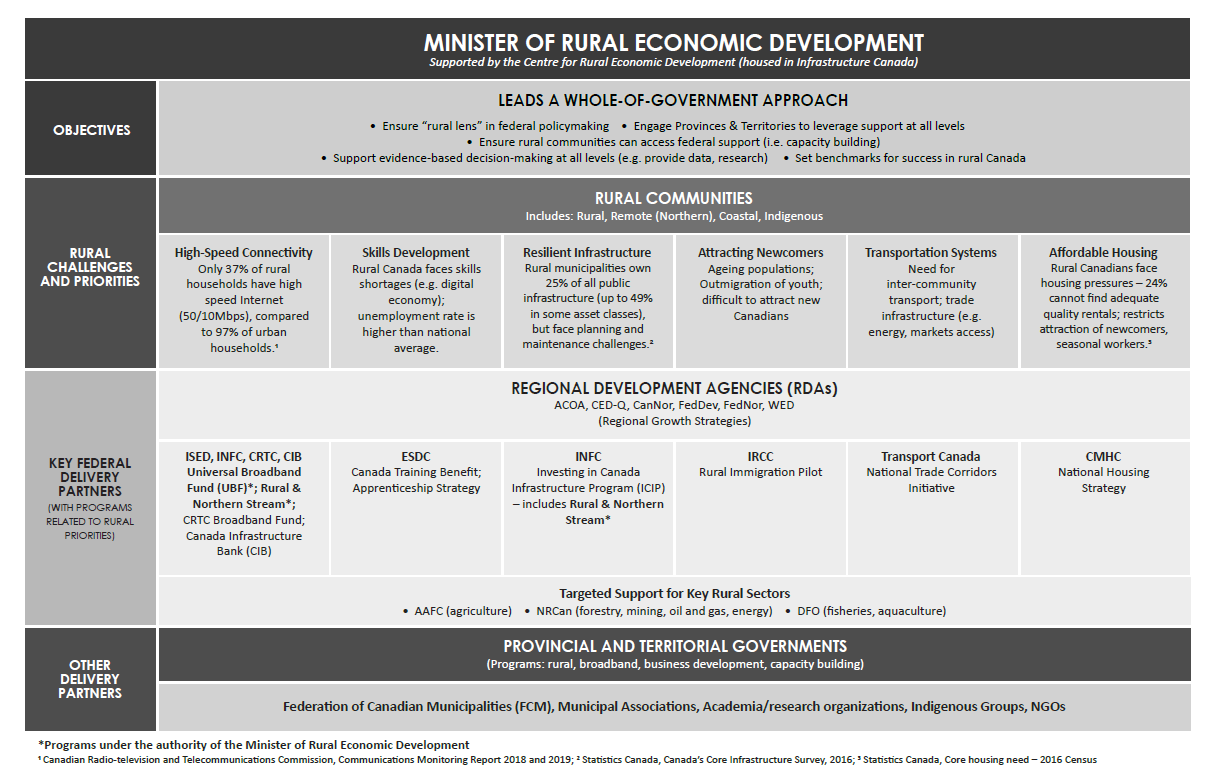 What We Heard: Key Issues and Themes

What We Heard: Key Issues/Themes 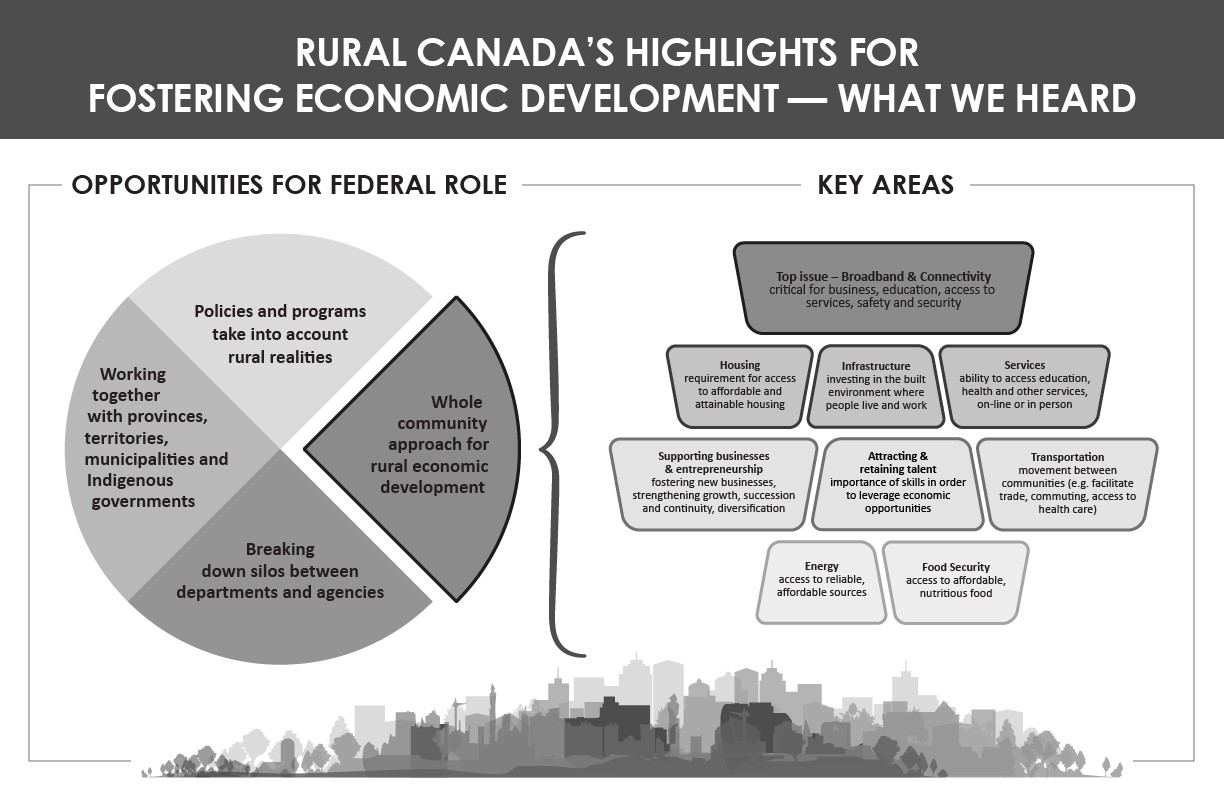 Demographics: there has been a population shift from rural to urban areas 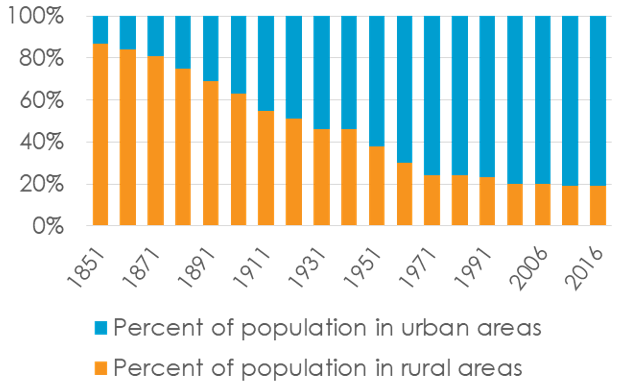 Demographics: there are key demographic differences between rural and urban areas 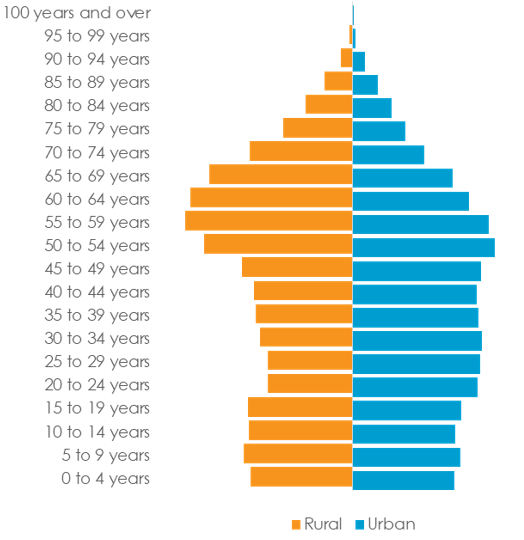 Economy: GDP per capita is higher in rural areas 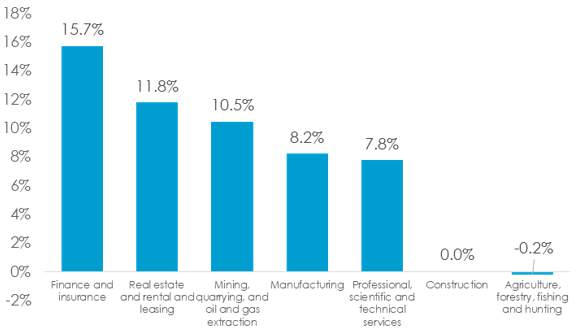 Unemployement Rate by Province and Rural/Urban, 2018 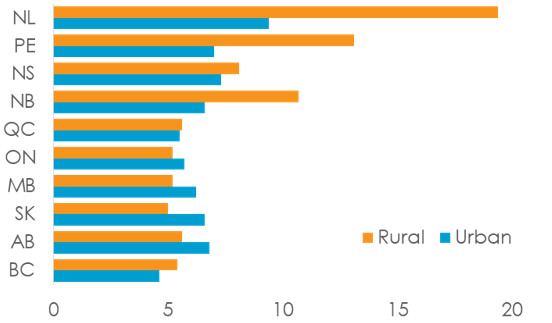 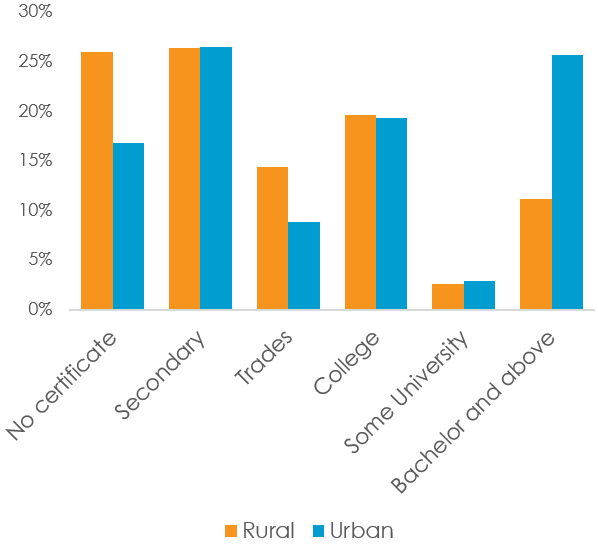 Society and Health: rural Canadians are satisfied with their lives, but face lower health outcomes 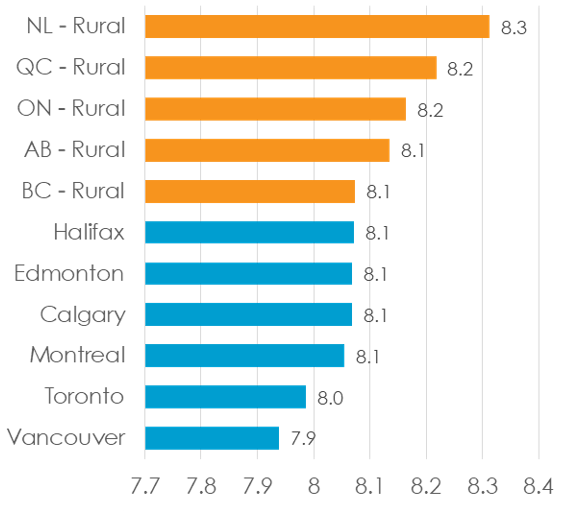 Home Ownership: rural Canadians are more likely to own their homes 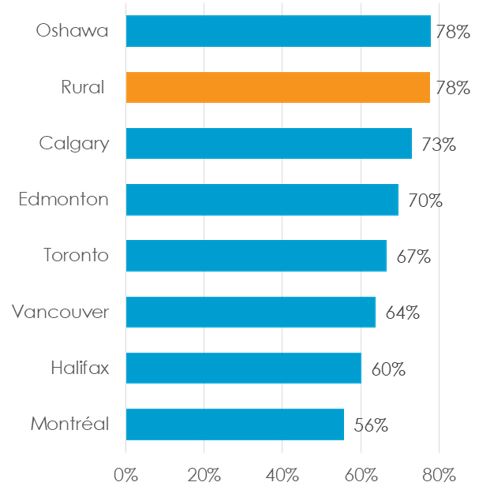 Download Speed Availability in Mbps, Urban vs Rural (% of Homes) 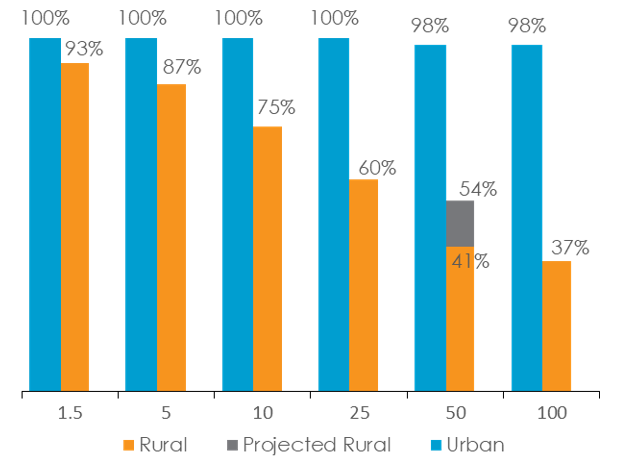 Ownership of Infrastructure by owner type, 2016

Share of new assets built in 2016 by owner type 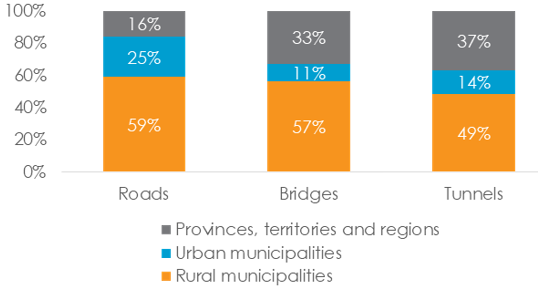 Overwhelmingly, rural and remote communities have identified unreliable and slow internet connectivity as the number one issue impeding their economic growth. The need for improved internet and cellular connectivity is felt by rural and remote communities across the country, in every province and territory. High-speed Internet is regarded as critical for rural communities to enable economic growth, retain youth, attract talent, grow a business, and adopt new technologies.

Although all Canadian households have access to some form of internet access, Canadians living in rural and remote areas face significantly slower, less reliable Internet access than those in urban centres. In addition, there can be gaps in mobile connectivity, including along major roads and highways. The low population density and challenging terrain can make the business case for investing in rural areas challenging.

The federal government has had a series of broadband funding programs over the past two decades to help support rural connectivity in areas that lack a private sector business case. However, as the needs of Canadians continue to grow and evolve, continued support will be needed to make sure rural and remote areas do not fall further behind. The Canadian Radio-television and Telecommunications Commission (CRTC) has set high-level targets for high-speed Internet and cellular connectivity. There are several federal funding programs that support investment in areas where there is a lack of business case for the private sector. Other federal tools are also used to support access, such as regulation of spectrum frequencies (the critical public resource that is essential for wireless services), and to promote affordability of internet and cellphone plans for Canadians.

ISED has put in place a series of programs to improve Internet access, including Broadband Canada (2009), Connecting Canadians (2014), and Connect to Innovate (2016).

More recently, ISED secured new funding, including $1 billion over 10 years for the next ISED broadband program. As ISED moves forward with the design of the new program, the department will build on existing collaboration with federal partners, provincial-territorial governments, the private sector, and Indigenous communities to help maximize benefits for Canadians.

ISED is also seeking to leverage new low-Earth orbit (LEO) satellite technology to deliver high-speed Internet services to Canada’s most remote and northern regions. LEO involves launching hundreds of satellites (a “constellation”) closer to the Earth than traditional satellites, offering greater capacity and improving performance considerably.
In July 2019, the Minister of ISED announced the signing of a Memorandum of Understanding (MOU) with Telesat to invest up to $600 million to secure broadband capacity over Canada from its planned LEO satellite constellation. The initiative remains subject to Treasury Board approval and reaching the final terms of a contribution agreement.

Broadband infrastructure projects are eligible for funding under the Rural and Northern Communities Stream of the Investing in Canada Infrastructure Program (ICIP). To date, the stream has been used by to support significant broadband projects in PEI, Quebec and Nunavut.

The ICIP is a ten-year, $33.1 billion program providing funding for public infrastructure initiatives across Canada. It is managed through Integrated Bilateral Agreements (IBAs) with the provinces and territories.  In consultation with municipalities and Indigenous communities, the provinces and territories are responsible for identifying, prioritizing and submitting projects and flowing funds to eligible ultimate recipients.

The CRTC has created a $750 million fund to support the rollout of broadband to rural and remote households. On June 3, 2019 the CRTC launched its first call for applications, which focusses on broadband and mobile connectivity projects in the three territories and satellite dependent communities across Canada. The deadline to submit applications for the first call was October 3, 2019. The CRTC has launched a second call for applications that is open to all types of projects in all eligible geographic areas, and expects that projects will be announced in 2020. Applicants have until March 27, 2020, at 5 pm PST to apply.

As an independent administrative tribunal, the CRTC operates at arms-length from federal departments.

The Canada Infrastructure Bank (CIB) uses federal support to attract private sector and institutional investment to new revenue-generating infrastructure projects that are in the public interest, including broadband infrastructure. By leveraging the capital and expertise of the private sector, the Bank is intended to be an additional tool that provincial, territorial, municipal and Indigenous partners can use to build infrastructure across Canada.

The CIB is a Crown corporation that operates at arm's length from government and is governed by a Board of Directors.

The competition between telephone and cable networks, as well as suppliers of satellite, wireless and other telecommunications services, has given Canadians a variety of choice in terms of both price and quality.  As competition and technology evolve, fibre, wireless mobile networks, and high throughput satellites are expected to provide Canadians across the country with even faster internet speeds and higher quality services.

The CRTC has also put in place policies and regulations that encourage competition and choice. For example, the CRTC requires the large telephone and cable companies to lease portions of their networks to their competitors, at regulated wholesale rates. As a result, a number of smaller Internet service providers have entered the market and often offer greater choice and lower prices for Internet services. A recent study found that average broadband Internet prices offered by smaller service providers were up to 35 percent lower than those of the large companies.

Promoting Competition: ISED has taken a number of steps that respond directly to concerns raised by smaller rural service providers. Earlier this year ISED introduced smaller licensing areas (known as Tier 5) that will make it possible to licence spectrum in small areas that rural providers could more easily afford. Changes were also made this summer to the fee structure for wireless backhaul, which will reduce a significant recurring cost for many rural/remote broadband providers.

Promoting deployment in rural areas: In order to support the provision of high-quality services in rural and remote areas, ISED is executing its plans to make additional spectrum available for broadband services and to facilitate access to spectrum. Its next spectrum auction (3500 MHz) is planned for 2020, and the consultation currently underway asks a number of questions that pertain to rural connectivity.

ISED will continue to make additional low, medium and high frequency spectrum available to support the deployment of new technologies such as 5G, as well as to introduce measures to improve access in rural and remote areas such as smaller licence tiers, lower licence fees, and a modernized satellite framework.