Various measures were put in place to minimize the project's environmental impact and effect on community residents related to:

Further information on the measures being taken to protect the environment and the community throughout the project is available on SSL's website.

Mitigation Measures Before, During and After the Work 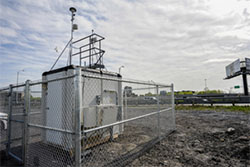 Various mitigation measures were identified in the environmental assessment to mitigate impacts of the project on the natural environment. A few examples are presented below. 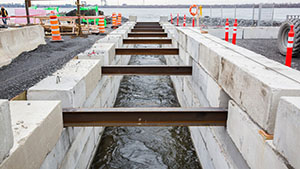 A fish passage on the west jetty worksite

Fish habitat will be protected by:

Water quality will be protected by:

Environmental offsetting is a mitigation mechanism that is normally applied to ecosystem components that are particularly sensitive or important. It involves creating or enhancing these ecosystem components elsewhere in order to compensate for losses resulting from the implementation of a project.

Targeted Environmental Assessment: Update to the Area of Encroachment on Fish Habitat (2015)

Following the completion of the environmental assessment, it was determined that the permanent encroachment of the new Champlain Bridge would be smaller than initially anticipated but that the temporary encroachment (caused by the work) would be more significant than previously thought. The Targeted Environmental Assessment: Update to the Area of Encroachment on Fish Habitat (2015) was produced jointly by Infrastructure Canada and Fisheries and Oceans Canada to analyze the environmental impact on fish habitat caused by the increased encroachment of the project and ensure that appropriate mitigation measures were identified.

As part of the environmental assessment for the new Champlain Bridge project, mitigation measures were developed prior to preliminary works in order to protect the archaeological heritage of Île-des-Soeurs. The survey targeted the archaeological site known as the “LeBer site”, which consisted of the vestiges (foundations) of the former estate (Domaine LeBer), built in the 1670s.

The goal of the survey was to free the site of any archaeological constraints before the start of the new Champlain Bridge project in June 2015. The configuration of the new bridge requires the relocation of René Lévesque Boulevard to this site. The archaeologists located and documented known vestiges, expanding the search to an area where no survey had previously been conducted, in order to obtain the most information on the entire site to be affected by the work. The survey took place in 2014. It is in this context that the Archaeological investigation on Île-des-Soeurs (2014) report was drafted.