Vancouver, British Columbia, June 1, 2013 – The Honourable Denis Lebel, Minister of Transport, Infrastructure and Communities, Minister of the Economic Development Agency of Canada for the Regions of Quebec and Minister of Intergovernmental Affairs, today discussed how Canadian communities from coast to coast to coast will be stronger as a result of the Harper Government's new infrastructure investments, at the Federation of Canadian Municipalities (FCM) Annual Conference and Trade Show. 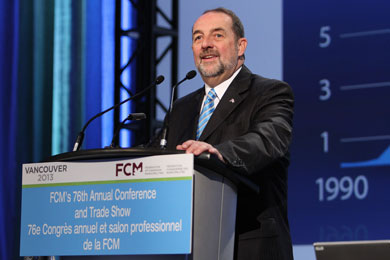 "Our Government recognizes that investments in Canada's public infrastructure create jobs, economic growth and provide a high quality of life for families in every city and community across the country," said Minister Lebel. "In our Economic Action Plan 2013, we delivered the longest and largest commitment to job-creating infrastructure funding in Canadian history."

Economic Action Plan 2013 builds on the Harper Government's investments and includes the $53 billion New Building Canada Plan to build roads, bridges, subways, commuter rail, and other public infrastructure in cooperation with provinces, territories, and municipalities over 10 years, starting in 2014-15.


The new plan, which follows extensive consultations with the FCM and other stakeholders, will take effect following the conclusion of the original Building Canada program at the end of the current fiscal year.

"We will not miss a construction season," Lebel said.

Minister Lebel also noted that the federal Gas Tax Fund transfer – a vital part of the infrastructure plan – respects municipal decision making around infrastructure. So far, more than one-quarter of the Fund – a total of $2 billion – has been provided to public transit projects, and in five of Canada's largest cities, all or nearly all of the Gas Tax transfer goes toward public transit. Other municipalities have different local priorities. For example, more than 10 per cent of the Gas Tax Fund transfer has been used for wastewater projects.

"We have a flexible plan that lets local councils set local priorities," he said. "We will not impose a made-in-Ottawa solution."

Since 2006, the Harper Government has made unprecedented investments in over 43,000 projects to build roads, bridges, commuter rail and other important public infrastructure and has invested over $5 billion in direct contribution funding to public transit projects across the country. The New Building Canada Plan, combined with other federal infrastructure investments, supports Canada's infrastructure advantage, which is a key enabler of economic growth and job creation.

For additional information about investments in infrastructure and to stay up-to-date with Web feeds, visit Infrastructure Canada.

Marie-Josée Paquette
Press secretary
Office of the Minister of Transport, Infrastructure and Communities, Minister of the Economic Development Agency of Canada for the Regions of Quebec and Minister of Intergovernmental Affairs
613-991-0700

$53 billion for provincial, territorial and municipal infrastructure, including over $47 billion in new funding, over the next 10 years

The new plan will encourage greater involvement of the private sector in the provision of public infrastructure and ensure better value for taxpayers. Projects with capital costs of over $100 million under the new Building Canada Fund would be subject to a P3 screen to determine whether better value for money can be achieved through P3 procurement.

The Minister of Transport, Infrastructure and Communities will work with stakeholders on outstanding program parameters for the new Building Canada Fund and will announce details later this year. In the meantime, we will continue to work with our partners and stakeholders to deliver funding under our existing programs.