Yellowknife, Northwest Territories, March 13, 2013 — The Honourable Leona Aglukkaq, Minister of Health, Minister of the Canadian Northern Economic Development Agency and Minister for the Arctic Council, today echoed Prime Minister Stephen Harper's Monday's announcement confirming that the Government of Canada is increasing its support for the construction of the Inuvik to Tuktoyaktuk highway by $50 million. The construction of this highway will have a positive impact on growth and job creation in the Northwest Territories.

The 140-kilometre all-season highway linking the Town of Inuvik with the Hamlet of Tuktoyaktuk has been identified as a priority by the governments of Canada and the Northwest Territories. Extending from the Dempster Highway to the Arctic coast, this road will complete Canada's road network from coast to coast to coast.

"Our government is proud to increase our investment in the construction of the Inuvik to Tuktoyaktuk highway, which will strengthen Canada's Arctic presence and contribute to economic and social development in the North," said Minister Aglukkaq. "Our infrastructure investments are an important driver of economic growth and job creation here in the Northwest Territories and across Canada."

In Economic Action Plan 2011, the Government of Canada set aside $150 million over five years to support the construction of the Inuvik to Tuktoyaktuk highway. Today's announcement increases the Government of Canada commitment to up to a total of $200 million. Federal funding is conditional on the completion of the environmental assessment and the signing of a contribution agreement.

The Government of Canada is focused on four priorities, as outlined by the Prime Minister that Canadians care about: their families, safety of our streets and communities, their pride of being a citizen of this country and their personal financial security. The Inuvik to Tuktoyaktuk highway is a project that all Canadians can take pride in, and will have a direct impact on the regional economy, which will benefit Northerners and their families.

For additional information about federal investments in infrastructure and to stay up-to-date with Web feeds, visit Infrastructure Canada.

Geneviève Sicard
Press Secretary
Office of the Minister of Transport, Infrastructure and Communities
613-991-0700

Government of Canada Increases Commitment to Inuvik to Tuktoyaktuk Highway

The Inuvik-Tuktoyaktuk Highway will be a 140-kilometre, all-season roadway that connects the Town of Inuvik with the Hamlet of Tuktoyaktuk.

The project involves the construction of a gravel highway. It will provide year-round overland access to Tuktoyaktuk, which is currently only served by ice road, barge and air. On a national level, the highway represents the last link in a highway system from sea to sea to sea, connecting the Beaufort Sea and the Arctic region by road to the rest of Canada.

In addition to strengthening the local and territorial economies, having an all-season Inuvik-Tuktoyaktuk highway will decrease the cost of living in Tuktoyaktuk by enabling goods to be shipped year round, provide more opportunities for business development and expansion, and reduce the cost of onshore oil and gas exploration and development. 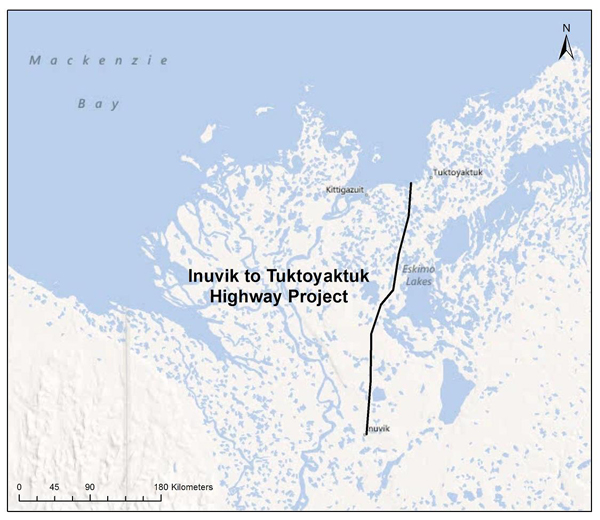