Calgary, Alberta, February 22, 2013 – Today, the National Music Centre (NMC) broke ground on its new 160,000 square-foot building in downtown Calgary's East Village. The Centre will be home to the history of music in Canada, including the country's biggest collection of musical instruments and sound equipment, the Canadian Music Hall of Fame, and the Canadian Country Music Hall of Fame Collection. It will also include performance spaces, recording studios, broadcast facilities, the Rolling Stones mobile recording studio, and artist-in-residence programs – as well as Calgary's famed King Eddy Hotel. 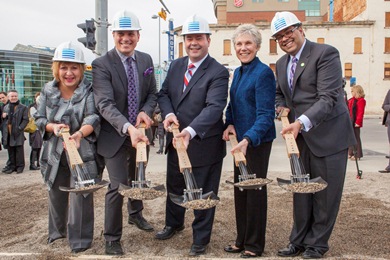 Anne Murray, Canadian icon and NMC Honourary Patron, spoke about her support for the Centre. "Access to music – music history, education and appreciation – has been so important to me throughout my life. I am thrilled to be involved in a project that invites all Canadians to discover and appreciate the history and culture of music in our country."

"The National Music Centre will share our rich musical heritage and world-class Canadian talent in a state-of-the-art downtown venue," declared the Honourable Jason Kenney, Minister of Citizenship, Immigration and Multiculturalism and Member of Parliament for Calgary Southeast. "Our Government is proud to support this inspiring initiative that will promote Canadian culture, create jobs and drive economic growth in Alberta."

"Music is the celebration of life and one of Alberta's finest exports," said Alberta Premier Alison Redford. "The beautiful new National Music Centre will be home to many of Canada's treasured musical legacies while providing opportunity to foster a new generation of musicians and audiences. The Government of Alberta is proud to support this important cultural project."

"On behalf of The City of Calgary, I am proud of the investment we've made to the expansion and continued development of National Music Centre," said Naheed Nenshi, Mayor of Calgary. "This will be a unique and important institution for all music-loving Calgarians including artists, students, educators, historians, and their families."

The campaign goal for the project is $150 million, and the building is scheduled to be complete in 2015. The new building will allow more Canadians than ever to be part of NMC's vision to amplify the love, sharing and understanding of music in Canada.

The sod turning celebration continued Friday evening with a public concert at the Golden Age Club in Calgary's East Village, with live local music by the Bobby Kork Orchestra, the High Kicks, Matt Masters and The Gentlemen of the Rodeo, and the King Eddy Blues All-stars.

The National Music Centre is committed to amplifying the love, sharing and understanding of music. Its vision is to become a national catalyst for discovery, innovation and renewal through music. NMC is home to the histories and memories of music in Canada, with a growing collection of unique and iconic musical instruments and sound equipment. Through partnerships with the Canadian Academy of Recording Arts and Sciences, and the Canadian Country Music Association, NMC will also be home to their respective halls of fame which celebrate Canadian achievement in music. NMC currently reaches more than 75,000 people each year through its collections, performance spaces and programs.

The new National Music Centre will be a 160,000 square-foot, architecturally stunning destination in the heart of Calgary. Spanning 4th Street SE, the building will be a gateway into a revitalized East Village – an innovative community reinventing itself as the newest, oldest, coolest, warmest neighbourhood in town. Designed by Allied Works Architecture under the direction of Brad Cloepfil, the new NMC will resonate with expanded programming including education, performance, entertainment, recording, artist incubation and community building collaborations – both in Calgary and across the country. An expanded National Music Collection will be showcased in exhibitions designed by the internationally renowned firm Haley Sharpe Design.

Visit the media section of the National Music Centre for more information about the new building.

The campaign total for the National Music Centre is $150 million: $135 million for the building project and $15 million for related development and programming costs. Three levels of government have committed a total of $75 million. The Government of Canada is finalizing a contribution agreement with the National Music Centre and will contribute up to one-third of total eligible costs, to a maximum of $25 million towards this project through the Building Canada Fund — Major Infrastructure Component.

The Province of Alberta and the City of Calgary have also each committed up to $25 million. To date NMC has raised an additional $22 million, for a total of $97 million. NMC is raising the remaining funds with support from the private sector and philanthropic organizations across Canada.