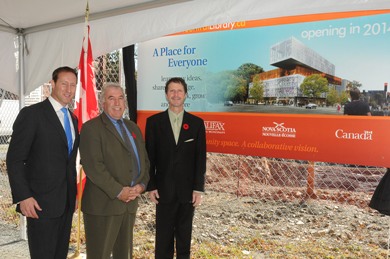 The Halifax Central Library will replace the current Spring Garden Road Memorial Library and serve as a central resource centre for residents. It will also help drive the economic revitalization of the downtown area, and be a new attraction for visiting tourists.

"Our government is proud to invest in infrastructure projects that create jobs, strengthen communities, and contribute to the local economy," said Minister MacKay. "We are very pleased to support the Halifax Central Library. Thanks to a lot of hard work over the last two years, this new state-of-the-art facility will enrich the lives of local families for many years to come."

At approximately 100,000-square-feet, the facility will include a larger book collection, additional meeting and study rooms, a 250-seat cultural and performance space, and areas for computers and emerging technologies.

"Libraries continue to be important public institutions that inspire learning and knowledge, and empower people," said Minister MacDonell. "Our new Halifax Central Library will be a landmark for downtown and a great public space for the community to gather. It will attract visitors from all parts of the region and will help make life better for Nova Scotia families."

Mayor Peter Kelly thanked the provincial and the federal governments for their financial commitment and paid tribute to HRM residents for their involvement with the new facility.

"Thanks to the vital contribution citizens have made to its design and purpose, this new library will benefit our community for generations to come," Mayor Kelly said. "I am honoured to participate here today as we take one more step toward making this landmark resource a reality."

"We are very excited that work on the site of this long-awaited project is now well underway," said Philip Moscovitch, Chair of the Halifax Regional Library Board. "Today's official groundbreaking marks a major milestone both for Halifax Public Libraries and for the community as a whole — and we are delighted to be able to celebrate it with our federal, provincial and municipal partners."

Funding for this facility was announced on October 19, 2009, with the Government of Canada providing up to $18.3 million from the Major Infrastructure Component of the Building Canada Fund. Nova Scotia will provide $13 million and the HRM will contribute $23.7 million toward the project, which has a total estimated cost of $55 million.