Toronto, Ontario, June 29, 2011 — A suite of new permanent galleries was unveiled today at the Royal Ontario Museum (ROM), thanks to a joint investment from the Government of Canada and ROM donors. Media were joined today by government officials at an unveiling and first official viewing of the new galleries, which will open to the public on July 1, 2011. 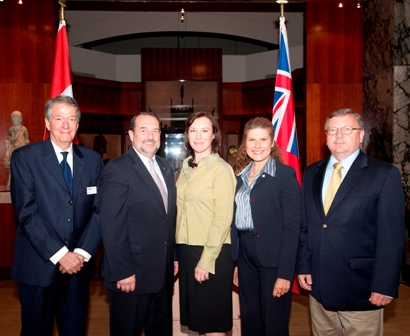 This project involved the construction of new galleries which have added approximately 7,000 square feet to the ROM's permanent public galleries displaying core collections in World Culture and the museum's renowned collection of antiquities. Housed within these new galleries are the Joey and Toby Tanenbaum Gallery of Byzantium, the Eaton Gallery of Rome, the Joey and Toby Tanenbaum Gallery of Rome and the Near East and the Galleries of Africa: Nubia.

"The Government of Canada's investment in the Royal Ontario Museum demonstrates our commitment to improving and preserving cultural infrastructure across the country," said the Honourable Denis Lebel, Minister of Transport, Infrastructure and Communities. "The Royal Ontario Museum is an artistic and historical gem that enriches the Toronto area with its dynamic exhibits and distinguished galleries."

"This investment has allowed the ROM to develop stunning new galleries that explore more than 2,500 years of history from Europe, Africa and West Asia, through notable artifacts and compelling original video based on ROM research," said Janet Carding, ROM Director and CEO.

"These new galleries bring the empires brilliantly back to life for the Museum's many local and international visitors. As we explore these ancient civilizations, we can see their lasting influence on today's architecture, language, theatre, law, religion, and, of course, art."

The Government of Canada and the Royal Ontario Museum each committed $2.75 million toward the total eligible project cost of $5.5 million.

Federal funding for this project comes from the Government of Canada's $4-billion Infrastructure Stimulus Fund, which is supporting over 4,100 infrastructure projects across the country.

For additional information about investments in infrastructure, visit Creating Jobs.

Vanessa Schneider
Director of Communications
Office of the Minister of Transport, Infrastructure and Communities
613-991-0700