Information identified as archived is provided for reference, research or recordkeeping purposes. It is not subject to the Government of Canada Web Standards and has not been altered or updated since it was archived. Please contact us to request a format other than those available. 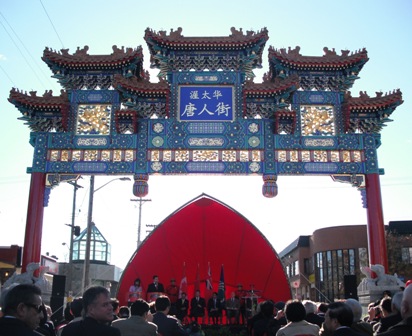 The City of Ottawa and the Somerset Street Chinatown Business Improvement Association BIA, along with the governments of Canada and Ontario and the Ambassador of the People's Republic of China to Canada, today celebrated the completion of the Ottawa Chinatown Gateway project. The new gateway is an official entrance into Ottawa's Chinatown. It is also part of a "twin-city" project between Ottawa and Beijing, China.

"The Gateway is a milestone in the friendly exchanges and co-operation between Beijing and Ottawa," said His Excellency Lan Lijun, Ambassador of the People's Republic of China to Canada. "It is also a symbol of China-Canada friendship. It shows that when we join our hands, we can do something of great significance."

"Canada is known as a land of rich and diverse culture," said the Honourable John Baird, Leader of the Government in the House of Commons. "I am proud that the Government of Canada provided support to a project that recognizes the diversity that makes Canada such a unique and wonderful country to live in."

"This beautiful new gateway is a lasting symbol of Ontario's commitment to culture and diversity," said Yasir Naqvi, Member of Provincial Parliament for Ottawa Centre. "Through our government's Open Ontario plan, we are strengthening our ties globally and making a big impact on our communities."

"The Ottawa Chinatown Gateway is a magnificent symbol of the friendship and trust between the people of Ottawa and the people of Beijing," said Mayor Larry O'Brien.

Under the Infrastructure Stimulus Fund, the total eligible project cost is $600,000. The governments of Canada and Ontario each provided $125,000 for a total of $250,000 and the BIA provided $350,000. The BIA contributed another $80,000 in additional expenses required to complete the project. Of its total contribution, the BIA received almost $330,000 through generous corporate and private donations. The City of Ottawa provided the space required for the construction of the Gateway at no cost, as well as covered $290,000 in roadwork and other modifications required to accommodate and complete the structure. The City of Beijing contributed $300,000 of in-kind services, including architectural design, premium-grade materials and the expertise of Chinese tradesmen.

As part of the Government of Canada's Economic Action Plan, the $4 billion Infrastructure Stimulus Fund is providing funding for close to 4,000 infrastructure projects across the country.

The contribution from the Province of Ontario comes from its 2009 provincial budget that is supporting more than 300,000 jobs and strengthening Ontario's economy.

Since 2007, the governments of Canada and Ontario have committed more than $13 billion in funding to more than 6,400 infrastructure projects across the province.

This traditional arch (also known as a Paifang) will serve as a resplendent landmark of Ottawa's Chinatown. It will also be a major tourist attraction, which will contribute to the city's economic prosperity.

Construction of the arch included a team of technicians from China, as well as a group of artists who used traditional Chinese painting techniques to enhance the many ornate elements of the design. Glazed golden tiles, donated by China, adorn the nine roofs of the structure. Five symbolic metal coins, including one from the Tang Dynasty that is at least 1000 years old, are also embedded within the arch. The significance of these coins is to bring blessings to the arch, the city and its people.

As part of the Ottawa Chinatown Gateway celebrations, a special commemorative photo exhibition entitled "The Charm of Beijing" was also officially opened and is now on display in Jean Pigott Place at Ottawa City Hall. The public is invited to visit the exhibit, which will be on display throughout the Thanksgiving weekend.

The Ottawa Chinatown Gateway project is part of a series of events planned throughout 2010 to celebrate the 40th anniversary of the establishment of diplomatic relations between Canada and China.